Consider it a Swiss health warning.

The Alpine country’s battles with the EU over emergency notifications about dangerous diseases is a preview of what could come with Brexit.

In a worst-case scenario, it could mean Britain receiving no official updates from Spain about a person diagnosed with Ebola, or France hitting a wall of silence from Britain about the latest news on bacterial resistance to antibiotics.

It is Switzerland’s experience that has signaled the alarm. The country’s foreign ministry said this month that Bern’s stalled talks over integrating into the EU single market means that its bilateral arrangement with the EU on public health early warning systems is still on ice.

The implication is that, for now, Swiss medical officialshave to find out about infectious disease outbreaks on an informal basis from contacts across the EU.

“Anything from anywhere in the world can be in the EU in 24 hours. With a neighboring country it’s even more quickly” — Andrea Ammon, ECDC chief

Worryingly for the U.K., Switzerland’s negotiations with the EU have been dogged by exactly the same sort of issues that are at stake in Brexit negotiations: the jurisdiction of the European Court of Justice and freedom of movement.

Paul Cosford, director of health protection at Public Health England, a government agency, stressed that Britain was a world leader in tackling cross-border threats and underlined the importance of communication. “We benefit from a range of international information-sharing mechanisms in the area of health security, including with the EU, among others and believe it is in everyone’s interests to continue to collaborate closely going forward,” he said.

As an EU member, the U.K. participates in the Early Warning and Response System of the European Union (EWRS), a tool for monitoring public health threats in the EU that could spread across borders, and the Rapid Alert System for Food and Feed (RASFF), which sends alerts 24/7 about potential threats detected in the food supply, according to the European Commission.

The U.K. also is a member of the Health Security Committee, which meets under the Commission’s supervision to coordinate responses to cross-border health threats. The European Centre for Disease Prevention and Control (ECDC) also runs the European Surveillance System (TESSy), which depends on countries to supply data on 52 infectious diseases and other health issues that it then collects, analyses and disseminates. 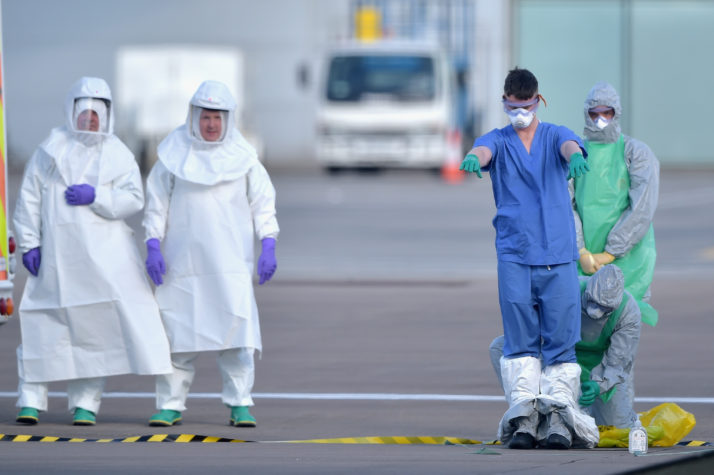 For now, Swiss medical officials have to find out about infectious disease outbreaks on an informal basis from contacts across the EU

ECDC chief Andrea Ammon conceded in a recent interview with POLITICO that she was in the dark about what would happen. She explained the ECDC works extensively with Public Health England but “will have to abide by whatever solution the EU and the United Kingdom will find in the negotiations.” Until those negotiations are concluded, “I really can’t make any predictions,” she said.

“Of course from a public health point of view we need to find a way to work with countries outside of the EU,” said Ammon, noting there are many models of how the ECDC has done so already. With infectious disease, “anything from anywhere in the world can be in the EU in 24 hours. With a neighboring country it’s even more quickly.”

A Commission spokesperson said that the U.K. would participate in all EU rapid alert systems until it leaves but accepted that the situation was not clear after March 2019. If the two sides manage to agree on a transition period, the U.K. is expected to stay a member of RASFF, one Commission official added.

There is precedent for non-EU countries being involved in at least some of the rapid alert systems. For instance, TESSy includes data from the EU28 plus two of the three other European Economic Area countries: Iceland and Norway. The RASFF includes food safety authorities from Norway, Liechtenstein, Iceland and Switzerland as well as the EU28.

Some EU surveillance systems will continue regardless of Brexit, for instance, the ECDC’s communicable disease threats reports, which are weekly summaries of all information gathered through “epidemic intelligence activities.”

Over €7M of suspect spending by EU asylum agency