The French presidency is in talks to loan historical masterpiece, the Bayeux Tapestry to Britain. Here's what you need to know about the artifact and what we know so far about its possible trip to the UK.

It's not a tapestry

To start with the 70-metre long Bayeux Tapestry, which depicts the events leading up to the Battle of Hastings as well as the event itself in 1066, isn't in fact a tapestry at all. Instead it is a work of embroidery made from wool stitched on to linen.

The embroidery is split into 32 scenes depicting the Norman invasion of Britain led by William the Conqueror.

Where does it come from?

The history of the Bayeux Tapestry which dates back to the 11-century has long been debated.

And despite being one of France's pride and joys, a book published in 2006 suggested that it was probably created in England, leading The Sun newspaper to write: “Give us back our Tapestry — the Bayeux masterpiece is British”. Some believe it was made by English nuns, citing the distinctive Anglo-Saxon art of the 230ft-long work as proof.

"There is a reasonable case that it could have been made in Canterbury" in southern England, British historian David Musgrove, who authored a book on the subject, told the BBC.

"There's a lot of stylistic elements in the tapestry which would suggest it."

If that's true, the loan from France would be something of a homecoming for the artifact.

Nothing is known for certain about the tapestry's origins. The first written record of the Bayeux Tapestry is in 1476 when it was recorded in the cathedral treasury at Bayeux as "a very long and narrow hanging on which are embroidered figures and inscriptions comprising a representation of the conquest of England".

Other theories are that it was made in Bayeux itself or perhaps in an abbey in the Loire region of central France.

Why was it made?

Despite the fact that French legend says the tapestry was commissioned by Queen Matilda, wife of William the Conqueror, it was probably commissioned by Odo of Bayeux, the half-brother of the king.

King Harold and the famous arrow

The embroidery's arguably most well-known scene (see above), where we see King Harold being killed by an arrow in the eye, is believed to be a myth.

Indeed it is thought that this version of his death originated from the Bayeux Tapestry itself.

Early accounts of the Battle of Hastings in fact suggest that he died from a lance through his chest before being hacked to death.

It's possible that the arrow from the sky — which would suggest a judgement from God on Harold — could have been French propaganda.

This isn't the first time another nation has been interested in getting its hands on the famous embroidery. Leading Nazi Heinrich Himmler once tried to take it for Nazi Germany but thanks to signals intercepted by the British, French Resistance fighters got to it just before German troops arrived.

Britain also failed to borrow the tapestry to celebrate the coronation of Queen Elizabeth II in 1953.

Journey to the UK

If the loan goes ahead the transportation of the embroidery would mean a huge operation and it would mark the first time the tapestry has left France in 950 years.

But at the moment no one knows if it is even capable of making the journey.

The French presidency confirmed on Wednesday that it was in talks to loan the Bayeux Tapestry to Britain, but that the embroidery would not be transferred before 2020.

An official in Macron's office said "it will not be before 2020 because it's an extremely fragile cultural treasure which will be subject to major restoration work before being transported anywhere."

And a spokesperson for the Ville de Bayeux told The Local that it could be even longer before tapestry makes it to British shores.

"We are in the process of planning a new museum which will house the embroidery. That means it's unlikely the loan will happen before 2023 when it is hoped we will be ready to close for the new development in France," she said.

The spokesperson suggested that Wednesday's announcement was a little premature (see above), saying that there was a lot to be decided before the loan could go ahead.

"At the moment we need to remain calm over the situation because no one knows if it's possible to send the embroidery to the UK. We must first conduct analyses to see if it's capable of making the trip and there will be a lot of conditions before it goes ahead.

"That said, we are very open to working with heritage organisations in the UK and are already very linked with the British Museum," she added.

The tapestry is vulnerable to many hazards including extremes of temperature, humidity, tearing, moths and even strong light, wrote The Times, adding that someone would have to accompany the tapestry on its trip to the UK and keep it in sight for the entire journey except for its time in the cargo hold.

It is also unclear where the tapestry would be displayed even if its odyssey to the UK is approved.

One thing is for sure: there's a lot more planning to do if the Bayeux Tapestry it to make it all the way to Britain intact.

Parisians warned as level of River Seine continues to rise 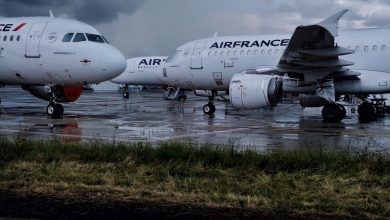