[contfnewc]
The demonstrators braved the rain Friday afternoon to stand under the scaffolding of 1271 Avenue of the Americas in Midtown Manhattan, even though the Clinton Foundation recently moved its offices after it shuttered the Clinton Global Initiative.

About ten to 12 demonstrators held signs to protest the Clinton Foundation’s use of State Department connections to award multi-million dollar contracts to Clinton cronies in Haiti.

One of the more colorful signs read, “Where the ‘Crooked Clintons’ belong—in a jail cell,” with a picture of Bill, Hillary, and Chelsea Clinton behind bars.

“How much money? Six billion dollars!” the protesters chanted, referencing the amount of money diverted from earthquake relief to the contracts.

These contracts, such as one multi-million dollar mining contract that Hillary Clinton’s brother received from the Haitian government, enabled Clinton Foundation donors to profit off the island nation as it struggled to rebuild from the disaster, which killed more than 300,000 people.

“The Clinton Foundation, which had an office in this building, stole $6 billion that was meant for the Haitian people.” said Dahoud Andre, one of the members of Komokoda, a New York City-based Haitian activist group leading the protest, as he spoke to a cameraman filming his statement on behalf of the group.

“The press over here, has not said anything to condemn the Clinton Foundation, and we hope that today, the press will take this opportunity to ask the Clintons what happened to these billions of dollars,” he added.

The organization, also known as the Committee to Mobilize Against Dictatorship in Haiti, serves to point out U.S. sponsorship of Haiti’s dictators. In 2017, they staged a protest in Brooklyn against the U.S.-backed Haitian president Jovenel Moise, who had been indicted for money laundering, and protested Hillary Clinton’s commencement speech at Brooklyn College.

Andre, the de-facto spokesperson for the group, told Breitbart News that this is the third year the group has held a protest outside the building.

“Every day on the anniversary of the earthquake we come here…to denounce them as the thieves and the liars that they are [and] to demand that the money that they stole be returned to the Haitian people,” Andre told Breitbart News in an exclusive interview. 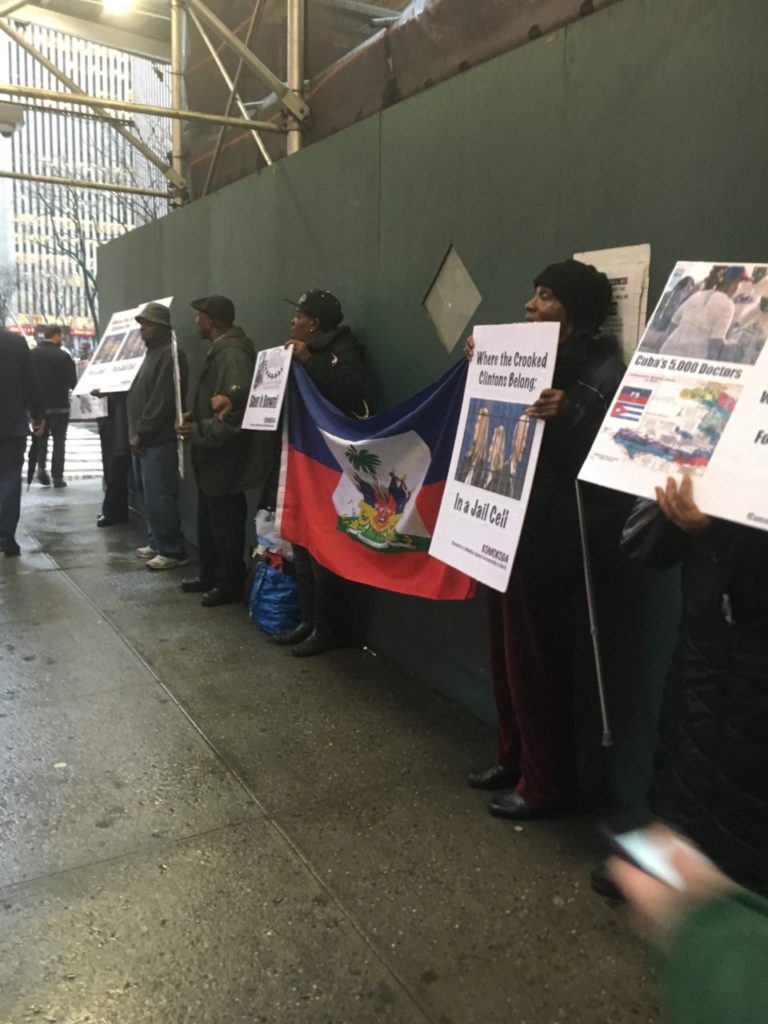 “Last year, when we came after the election, we said we wanted to thank the American people for ensuring that the Clintons did not get back to the White House. But at the same time, we said they have to keep pressure on Donald Trump,” Andre said.

“This year, we understand that the Justice Department started an investigation. We want to make sure that the pressure stays on–that this is not whitewashed.” 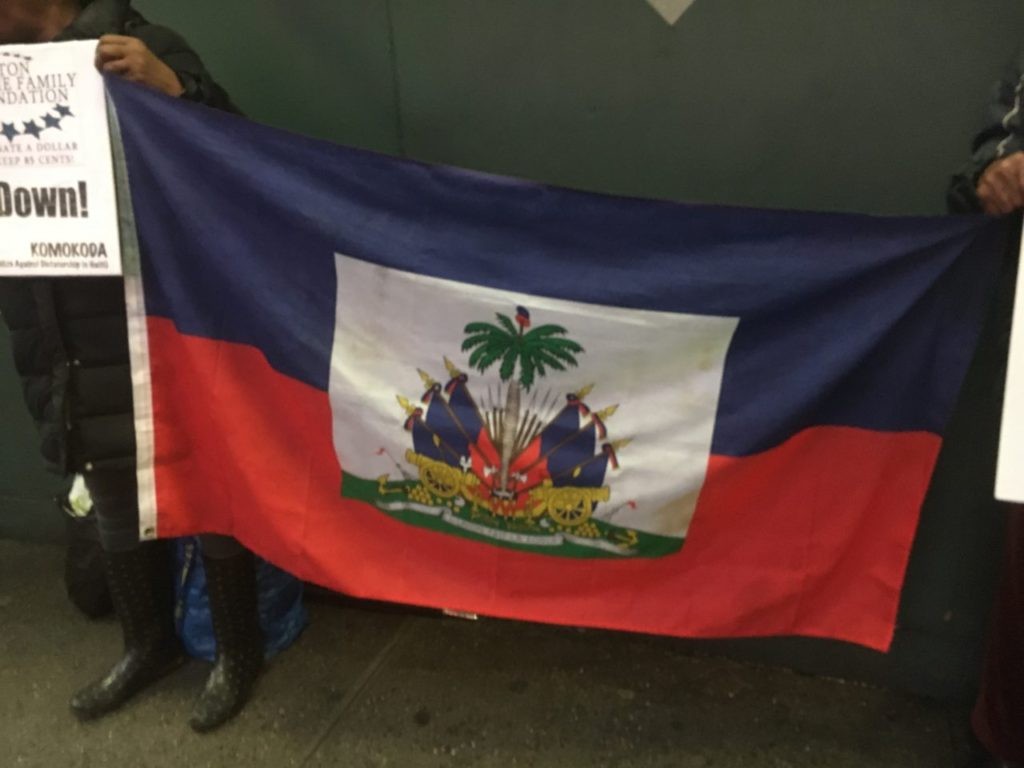 Another protester who joined the group later was more skeptical of the Justice Department’s intentions.

The protester, Amdije “Amiee” Toska, told Breitbart News that she thinks Justice Department officials will drag out the investigation to get paid more.

“I think they are going to take a long time,” Toska said. “They keep playing games, and I’m tired of it.”

Toska, who was not part of Komokoda or the Haitian community, said she joined the protest in solidarity against Clinton.

“We’re talking about Hillary constantly, but what about the people?” said Toska, who said she was disgusted by Clinton and other Democrats’ treatment of poor people.

Toska, a New Yorker who has called the streets of Midtown her home for the past few months, eventually stripped down to her underwear during the protest and yelled, “Lock her up!”

Other Haitian groups throughout the country have staged protests against the Clintons and their foundation for stealing money from earthquake victims and giving it to their cronies. Some groups have done so for years.

In 2016, Haitian immigrants protested outside the Democratic National Convention in Philadelphia against the Clinton Foundation’s pay-to-play schemes that hurt the Haitian people.

In 2014, another Haitian group protested in front of Bill and Hillary’s offices in New York against the Clintons’ “full support” of former Haitian President Michel Martelly, who had a reputation for putting his cronies in power.