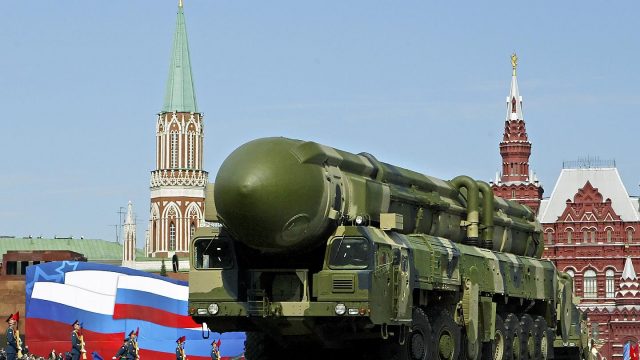 Russia and the United States have resumed talks on extending a major nuclear disarmament treaty but Washington’s insistence that China should be part of the deal may hamper dialogue.

Sergei Ryabkov, Russia’s Deputy Foreign Minister, and Marshall S. Billingslea, the US Special Presidential Envoy for Arms Control, are meeting for two days of talks in Vienna on Monday and Tuesday, to negotiate an extension to the New START treaty.

Progress is in doubt amid President Trump’s continued call for China to be involved. His envoy confirmed on Twitter on Monday that “China is a no-show” and accused Beijing of “still hiding behind a Great Wall of Secrecy on its crash nuclear build-up”.

However, the US would still proceed with talks with Russia, Billingslea added.

Earlier this month China repeated its stance that it has no intention of taking part in the talks as it is “not yet the right timing”. China’s estimated nuclear arsenal is dwarfed by those of the US and Russia and Beijing says these two countries have the primary responsibility to disarm.

oth the US and Russia suspended their obligations last year under the Intermediate-Range Nuclear Forces (INF) Treaty, which required them to permanently eliminate nuclear and conventional ground-launched ballistic and cruise missiles with ranges of between 500 and 5,500 kilometres.

The two countries accused each other of violating the treaty’s obligations but continued to adhere to New START (Strategic Arms Reduction Treaty), which limits the number of nuclear warheads Moscow and Washington can have at any one time.

The treaty, however, expires in February 2021.

Ryabkov described the upcoming talks as “good news” in a videoconference with the Council of Foreign Relations.

“We need to hear loudly and clearly what this [US] administration wants, how it believes it would be possible to do something positive and not just dismantle one arms control treaty or arrangement after another,” he added.

The Russian senior official said however that he was “surprised” by the US’ call that China join the meeting.

It followed a war of words between Billingslea and the Chinese foreign ministry, as the US envoy called for China to behave with “Great Power responsibility”, and Beijing accused Washington of “dragging China into the issue” to “deflect responsibilities to others”.

Ryabkov said Moscow “knows about China’s stance and treats it with respect” and instead called on Britain and France to join the talks, arguing that “we cannot simply ignore capabilities of some others”.

Nine countries around the world have nuclear warhead inventories. Together, Russia and the US own about 91% of all nuclear warheads, according to the Federation of American Scientists (FAS).

Washington, Moscow and London are reducing their capabilities, while France and Israel have kept relatively stable inventories, the FAS said in April. But China, Pakistan, India, and North Korea, are all increasing their inventories.

Beijing is estimated to have over 300 nuclear warheads.

Steven Pifer, a nonresident fellow at the Brookings Institute who focuses on arms control, welcomed the announcement of the June 22 meeting but advised it as “wise to keep expectations modest”.

He also expressed doubt that Billingslea’s “attempt to Twitter-shame China will get Beijing to [the] negotiating table”.

Kingston Reif, Director for Disarmament and Threat Reduction Policy at the Arms Control Association, also warned that the possibility of a breakthrough later this month seems narrow.

“There’s no chance of negotiating a new agreement before New START expires. None,” he wrote on Twitter.

He stressed however that “there’s nothing incompatible” with “pursuing more ambitious trilateral approach” that would include China.