"The Uganda Police have violently blocked Hon Bobi Wine from traveling outside of the country in spite of the court declining to do so when being released on bail earlier in the week. This is absurd to say the least," lawyer Nicholas Opiyo said on Twitter.Wine, whose real name is Robert Kyagulanyi, was first arrested by the military on August 15 after rioting broke out between rival parties ahead of a local parliamentary election.He has been in and out of court since then, most recently having been freed on bail Monday.Wine was on his way out of the country to seek medical treatment in the United States and was prevented from boarding a flight at around 8 p.m. local time, according to his legal team. He was then whisked away in a police vehicle to a government-owned hospital in the city with limited access to his family, one of his attorneys, Erias Lukwago, told CNN.Lukwago said the arrest was a "violation" of his rights and said the lawmaker has not recovered from injuries he allegedly sustained while in military detention. "The court did not seize his passport, despite prayers by the state to do so. This means Wine is free to travel out of the country for any reason. He can also seek medical attention wherever he feels better," Lukwago told CNN.Another of his attorneys, Robert Amsterdam alleged Uganda's special forces tortured the MP in the ambulance that took him to the hospital, while a doctor watched."He is seriously ill… he was brutally beaten and tortured last weekend and last night he was beaten again at the instructions of a senior officer of Ugandan special forces who told the occupants of the police van to "teach him a lesson", his words, whereupon they set upon him again, turned the lights off and beat him in front of a doctor," Amsterdam told CNN.Police also prevented another MP Francis Zaake from boarding a flight to India Thursday, saying he was a suspect in criminal case.Ugandan Police Deputy spokesman Patrick Onyango denied the MP's were tortured in custody and accused them of attempting to flee the country."He (Wine) was put in an ambulance well equipped with all the equipment you can think of, so they were really basically handled in a professional way," Onyango told CNN."They were trying to go against the procedure. I cannot believe what they're saying, until the medical team from the government ascertain or confirms to us that they were tortured that's when I can say they were," he added. 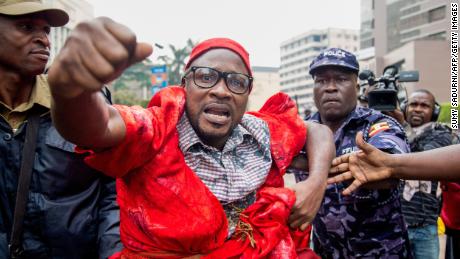 Pockets of protests broke out in Kampala capital Friday, as angry youths took to the streets to protest the MP's arrest. Police and soldiers moved through the city, particularly downtown Kamwokya, where Wine studio is located, to quell demonstration from his supporters, who had blocked roads in the neighborhood with rocks and tyres.A local journalist was allegedly beaten by the police while covering the demonstration.Wine is the leader of a youth movement that has rattled the regime of President Yoweri Museveni. His detention sparked mass protests in the country, leading to a large military presence on the streets of Uganda. Musicians around the world such as Chris Martin, Angelique Kidjo, Damon Albarn and others joined the campaign to #FreeBobiWine. 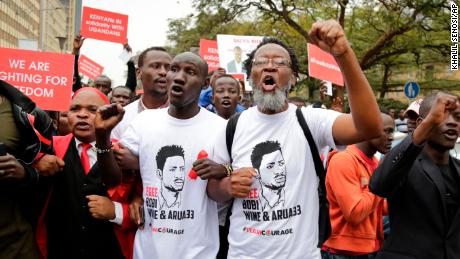 Journalists, including a senior photographer for Reuters and two employees of local broadcaster NTV Uganda, were also arrested as they covered the protests in Uganda's capital Kampala.The military later apologized for arresting the journalists. Museveni recently took to social media to dismiss allegations that Wine and other opposition MPs were tortured in detention.He said in a statement that doctors who examined the lawmaker said he had sustained "no head or chest injuries or bone fractures."He accused Wine and his supporters of intimidating voters and rigging the election in the district. 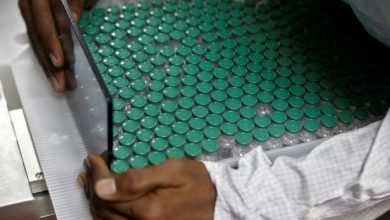