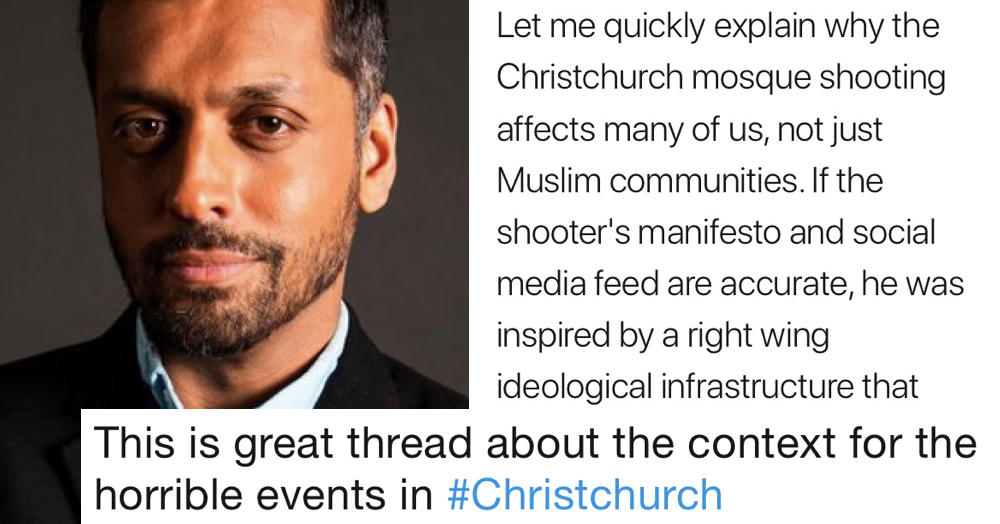 This thread went viral in the wake of the terrible attacks on two mosques in New Zealand which left 49 people dead and 48 injured.

New York Times writer Wajahat Ali went on Twitter to give some important (and terrifying) context not just to what happened in Christchurch but also what is going on around the world.

At the time of writing its been shared more than 16,000 times. Have a read and youll see why.

Let me quickly explain why the Christchurch mosque shooting affects many of us, not just Muslim communities. If the shooter's manifesto and social media feed are accurate, he was inspired by a right wing ideological infrastructure that thrives, recruits and radicalizes online 1/

He wrote a manifesto, just like Norwegian mass murderer Anders Breivik. He cites right wing personalities and military battles glorified by white nationalists, such as the Siege of Vienna in 1863 – where Europe staved off Islam apparently. 2/

Like mass murderer Breivik, he wants to punish Muslims and immigrants for allegedly invading his soil, he wants to take revenge. Notice the language of “invasion” – does it sound familiar? It should. Its used against immigrants and Muslims in America – 2018 midterms. 3/

He left behind a video, live streamed his rampage w/ a camera on his head, making it like first person video game DOOM. He shared it on social media sites. He wants to be known. He is a hero, a martyr, the one brave enough to do what others cant to save “Western” civilization 4/

Compare this to the Tree of Life Synagogue shooter in Pittsburgh. He killed 11 Jewish worshippers. He shared a post on his Gad account about punishing “filthy evil Jews” for bringing in “filthy evil Muslims.” This was in reference to the Soros-caravan conspiracy theory. 6/

The underlining ideology anchoring all of this is White supremacy and their main fear is “replacement.” That the immigrants, Jews, blacks and Muslims will replace them, the Whites. Remember Charlottesville? “Jews will not replace us.” See Steve Kings tweets about babies 7/

Steve Bannon, Trumps former chief advisor, cites CAMP OF SAINTS as one of his favorite books. He recommends it. Its a racist novel about brown immigrants “invading” and overtaking France. White natioanalists believe Jews are the head of the cabal who use the rest of us 8/

We are dealing with angry, disaffected men, mostly White, who find purpose & community with these extremist groups who give them a heros narrative through violent ideology of White supremacy. They are saving civilization by getting rid of the rest of us. Its like White ISIS 9/

The victims are not just Muslims, but also Jews, immigrants, refugees, Blacks, Sikhs, Latinos & women (they really hate feminists). Its a zero sum absolutism. No grey area. Just like ISIS. These groups are rising in the US & Europe. They have mainstream elected messengers. 10/

Pay attention. Take this extremist ideology & terror threat seriously. Be wary of politicians, academics & media heads who give it a platform and spout it under the guise of “free speech” and fighting “political correctness.” Look out for each other. Love each other. END.

And heres just a few of the things people were saying about it.

This is great thread about the context for the horrible events in #Christchurch https://t.co/znmVy3dNwG

Thank you for these insightful tweets. I am an American living in Christchurch. When the mosque was spray painted after 9/11, the community said it wasnt acceptable and cleaned it. We dont accept hate. We embrace diversity. Lots of us are angry and sad.

The fact that Trump would tweet a link to Breitbart in the wake of the Christchurch shooting (on the same day he made a blatant fascist threat of violence by his own supporters) makes this thread even tougher to read: https://t.co/GTCpAJRgg0

Excellent summary. The irony of a white Australian feeling this bitter hatred towards all others for invading his land (apparently which also includes New Zealand) wont be lost on anyone.

Scots photographer Lenny is wild about his new honour