Trump ended up denying that he criticized British Prime Minister Theresa May, the day after a British tabloid published an interview with him in which he did just that. He dismissed the interview, conducted by a Rupert Murdoch-owned publication, as "fake news" saying it didn't include his comments praising May.Trump said his comments came after he "read some reports" that suggested the United Kingdom would not be able to make a free trade deal with the US, but he said May and her representatives have since reassured him that will still be possible."I believe after speaking with the prime minister's people that it will absolutely be possible," Trump said. "The only thing I ask of Theresa is that we make sure we can trade, that we don't have any restrictions, because we want to trade with the UK and the UK wants to trade with us."Trump also said Friday he apologized to May for the interview, though it appears his apology was about the paper's omission of his comments praising her, not his criticism."She is a total professional because when I saw her I said, 'I want to apologize, because I said such good things about you,' " Trump said.Trump said May said, "Don't worry, it's only the press."Trump took pains Friday to praise May and reaffirm his belief in the special relationship between the US and the UK — "the highest grade of special" — during a news conference in which the questions focused on Trump's comments a day earlier in which he criticized May's "soft Brexit" plan and said she didn't listen to his suggestions on how to exit the European Union.Still, Trump — despite stomping all over diplomatic protocol by giving a critical interview as he headed to London — did not back away from his comments, reaffirming that he would handle Brexit differently than May and that he believes May's chief political rival in her own party Boris Johnson "would be a great prime minister.""I also said that this incredible woman right here is doing a great job, doing a fantastic job," Trump said, justifying his comments.During his news conference, Trump addressed a range of topics including his hope to address nuclear disarmament with Russian President Vladimir Putin during their upcoming Helsinki summit; defending his behavior at the recent NATO summit; and proclaiming that immigration has been "bad for Europe." 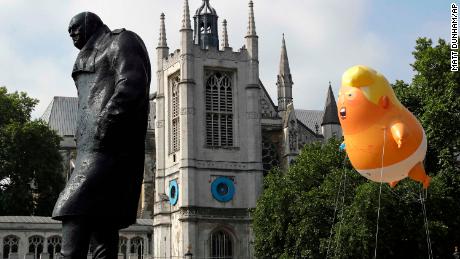 The US President, who has faced planned protests in London since his arrival, also told The Sun he feels "unwelcome" in London, explaining why much of his visit will take place outside the capital city.A giant "Trump Baby" blimp floated outside of Britain's House of Parliament on Friday morning.Blimp organizer Leo Murray told CNN the giant balloon had been designed to speak to Trump "in a language that he understands, which is personal insults."Tens of thousands of protesters marched through central London against Trump as he visits the UK, chanting "Donald Trump's not welcome here," and holding placards that call him the "World's #1 racist" and an "American psycho."Throngs of protesters began marching from outside the BBC at central London's Portland Place, slamming the President for his attitude and behavior toward women and controversial policies, including the Muslim travel ban and the separation of migrant children from their families at the US border, organizers of the "Bring the Noise" protest said. 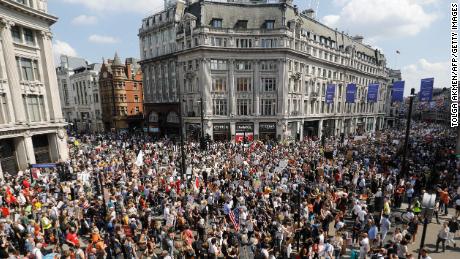 May insisted Friday that her country would have "no limit to the possibility of doing trade deals around the world" after Brexit.She was responding to a question about whether her latest Brexit proposal — which includes a "common rulebook" with the European Union — would make it impossible for the UK to make its own trade deals.May sidestepped a reporter's question about whether she felt undermined by Trump's reported comments on her Brexit plan.Trump insisted that he "didn't criticize" the British prime minister and said he has "a lot of respect" for her when asked during a joint news conference Friday about his interview with The Sun.Trump accused the British newspaper of omitting his praise of May, and said, "It's called fake news.""I didn't criticize the prime minister. I have a lot of respect for the prime minister," Trump said. "It didn't put in what I said about the prime minister, and I said tremendous things."During opening remarks ahead of the joint news conference with May, Trump said he is "OK with" however the British decide to carry out Brexit, despite trashing May's "soft Brexit" blueprint in The Sun."Whatever you do is OK with me," Trump said. "Whatever you're gonna do is OK with us, just make sure we can trade with you, that's all that matters." 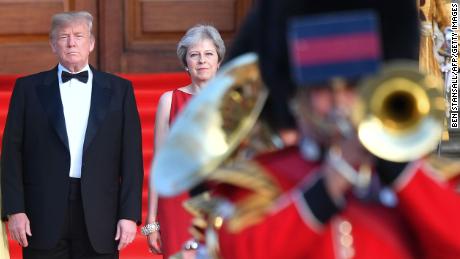 Asked earlier in the day whether he regrets his interview with British tabloid The Sun, Trump very visibly shook his head and rolled his eyes, turning to his aides with a look that showed his displeasure with the question.Trump's interview published Thursday amounted to a stunning diplomatic affront for a visiting US president, emerging while Trump was still at a gala dinner May threw in honor of his visit. The dinner offered much pomp and circumstance with a military band, red carpet and ornate surroundings, even though Trump's stop in the UK is officially not a state visit.For May, it comes at a time when she is already politically weakened following a string of resignations from her Cabinet.Despite Trump's criticism — which pounded the front pages of nearly every British newspaper — he and May carried on with their regularly scheduled meetings on Friday. The White House had attempted to mollify Trump's criticism, with White House press secretary Sarah Sanders releasing a statement insisting that "the President likes and respects Prime Minister May very much."

Trump also addressed his upcoming summit with Putin, insisting his behavior at NATO did not undermine putting forward a united front ahead of Helsinki."The other 28 countries have put in $34 billion more in to NATO. Do you think Putin is happy about that? I don't think so," Trump said.He said he plans to discuss with the Russian President ways to "substantially reduce" the two countries' nuclear weapons arsenals, calling nuclear weapons "the biggest problem in the world.""If we could do something to substantially reduce them … certainly it's a subject I'll be bringing up with him," Trump said.Trump noted that maintaining nuclear arsenals is "also very expensive," but said that was the "least important" issue.Trump also blamed the "political problem" in the United States — not Russia's meddling or aggressive actions around the world — for shackling him in his efforts to improve relations with Russia.Trump said "pure stupidity" in the US "makes it very hard to do something with Russia." 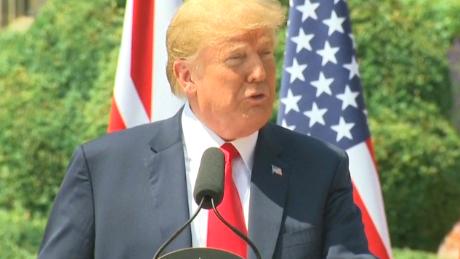 Trump also lamented immigration in Europe during his news conference, saying "it has been very bad for Europe."He warned European leaders to "better watch themselves" because he believes immigration is "changing the culture" of their societies."I think it has been very bad, for Europe … I think what has happened is very tough. It's a very tough situation — you see the same terror attacks that I do," Trump said."I just think it is changing the culture, I think it is a very negative thing for Europe," he added. "I know it is politically not necessarily correct to say that, but I will say it and I will say it loud."Speaking a few moments after Trump, May had a completely different message."The UK has a proud history of welcoming people who are fleeing persecution to our country," she said. "We have a proud history of welcoming people who want to come to our country to contribute to our economy and contribute to our society.""Over the years, overall, immigration has been good for the UK. It has brought people with different backgrounds, different outlooks here to the UK," May said, emphasizing as well that it is important for Britain to have control of its borders to regulate exactly who was entering. 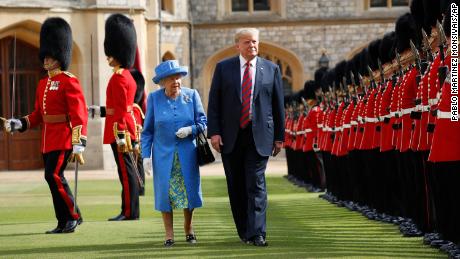 The President and first lady Melania Trump capped off their visit by meeting Queen Elizabeth II at Windsor Castle Friday evening.The Trumps entered the castle's Quadrangle by Range Rover after arriving on the castle grounds by helicopter. They arrived at the dais at 5:00 p.m. local time, where they were greeted by the Queen. The President wore a suit and tie and the first lady wore a pale pink Dior suit with matching skirt and black belt.Queen Elizabeth II has met every US president since 1952, with the exception of Lyndon B. Johnson.The Queen chatted with the Trumps as planes were heard overhead. The trio watched as the Coldstream Guards marched past the dais in perfect formation and the military band played before they entered the Sovereign's Entrance of Windsor Castle for tea precisely 10 minutes after their arrival.The Trumps European trip continues with a weekend trip to Scotland before arriving in Helsinki, Finland, for a highly anticipated summit with Russian President Vladimir Putin. 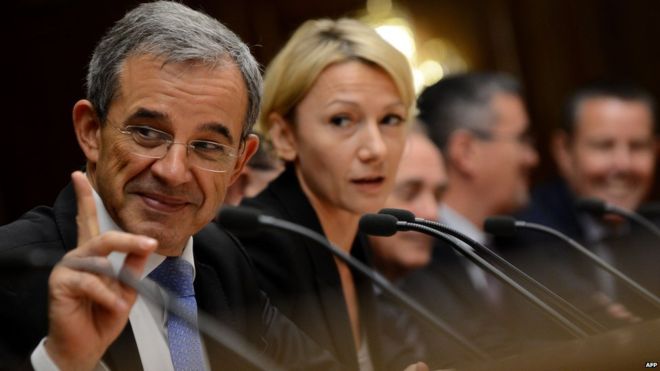 Thierry Mariani MEP: Saudi Arabia must abide by agreements signed with the EU 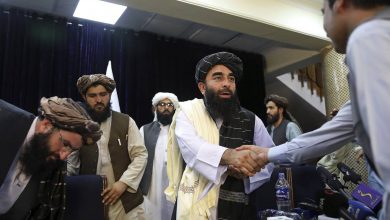 How should Europe engage with the Taliban?