express– Camping is increasingly popular and Britons are taking their newfound love of the outdoorsy holiday option right through the colder months. With rain, wind and cold to contend with, a UK camping holiday is no walk in the park.

When Chelle Holmes shared her “hack”, campers weighed in.

Chelle said: “Our storm straps make a funny noise when the wind is blowing, sounds like a motorbike.

“So I’ve twisted them. It’s stopped.

“Maybe a hack, maybe not, but it’s worked for us.”

Jessica Stacie Jenkins agreed: “Twisting storm straps is the only way to stop that sound! My Nan and Grandad have been doing it for years!”

And Dave Urquhart reminded everyone this handy tip could be applied to more than just tent storm straps: “It’s not just these straps.

“When I was installing phones decades ago the cables that run between poles or between the pole and house were always supposed to have twists put into them to stop them “galloping” as it was called.”

All the talk of storm straps was a bit confusing for some “learners”.

Nic Taylor asked: “Learner here; can storm straps be fitted to any tent? Do tents come with them? Do all tents need them?

“Do some tents need them more than most? Sorry for all the questions but I’ve never heard of them.”

“The ones that do, mainly very large tents, generally have a push buckle on an extended flap to attach them to, the tent needs to be designed to take the load of a storm strap, the majority aren’t.”

Storm straps can be helpful in foul weather.

“We camped out during storm Evert and many very windy nights by Lizard Peninsula and the tent was fine.

“We did pitch according to prevailing winds, if there is a storm you need to peg out accordingly.

“How you pitch and the overall condition of your tent will make a difference, a poorly pitched tent won’t be saved because of storm straps.”

And Charly Emma Douglass said: “My last fibreglass pole tent came as an optional but badly needed them, we had to replace all five sets of poles in one storm. Had we had the straps we may have just saved the tent.”

However, even without storm straps, Kath Lacey had a hack.

She said: “Our old tent didn’t have them.

“We bought two awning tie downs, wide straps that we put over the tent, front and back, pegged down on each side.

“Saw us through many a storm and a force 7 gale near the beach at Pentewan.” 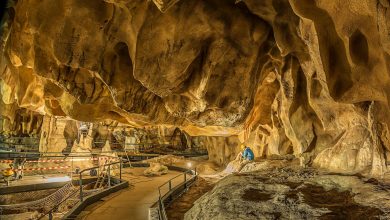 The spring awakening of the forest in France’s Ardèche region

Global tourism predicted to slow after best year ever