There’s something about this newspaper story that got people a little bit confused. Can you spot it?

THEY BLACKED OUT THE EYES ON THE DONKEYShttps://t.co/2sXWvtW7U2

It’s a story from Welsh newspaper the Daily Post about a man who tried to smuggle 12 donkeys into Holyhead.

And they really did black out the eyes on the donkeys’ faces as you can see from this excerpt from the story online. 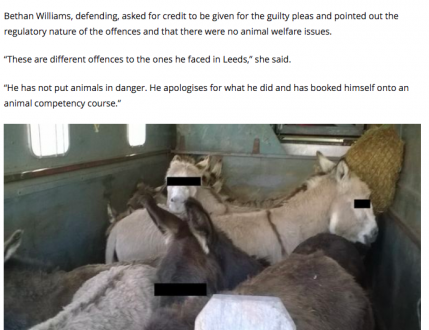 Let’s hope they’d do the same for sheep.

*cut to an interview with a silhouetted donkey's face, caption 'interviewee has requested his brays be recreated by an actor'*

They didn't want to prejudice their trial- don't you watch any legal dramas on TV?

Not forgetting this stock response …

Reminds me of this pic.twitter.com/zqOBejRICW

And it turns out they are not the only ones doing this.

THEY ALSO BLACKED OUT THE EYES ON THE GOOSE https://t.co/cYIo03ZfJO