A Queensland hospital incurred the wrath of a powerful electrical storm on Tuesday when lightning bolts rained down on the emergency and palliative care facility.

Severe thunderstorms hit Australian towns including Warwick, Toomwoomba, Dalby, Gympia and Gladstone on Monday and Tuesday. Images on social media show ominous clouds rolling over the southeast town of Warwick, where a lightning bolt caused damage to panels on the roof of Warwick Hospital.

Storm chasers Mick Loxley and his brother Chris McFerran captured the moment of the lightning strike, reports Warwick Daily News. Incredibly, the pair had photographed the same site being struck by lightning back in 2012.

Nobody was injured in the latest incident, but patients and staff did reportedly feel the impact of the direct hit.

Loxley, a photographer who has filmed a number of electrical storms in the area, said he caught the incident in slow motion on his iPhone. He told RT.com that he and his brother got to high ground as dark clouds built up over the town.

“My brother and I are weather enthusiasts and, after seeing a storm build west of Warwick, we set out to find a high vantage point to photograph it as it pushed across town,” Loxley said.

The incredible footage captures loud crackles filling the air as the lightning rained down around the medical facility.

No services at the hospital were disrupted as a result of the incident. 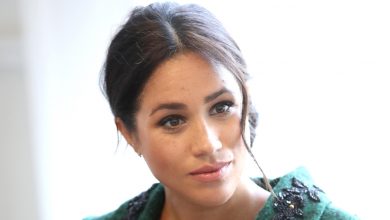 Meghan Markle Responds To Report That She Bullied Royal Aides

Down with dads? Researchers spawn healthy mice from 2 mothers