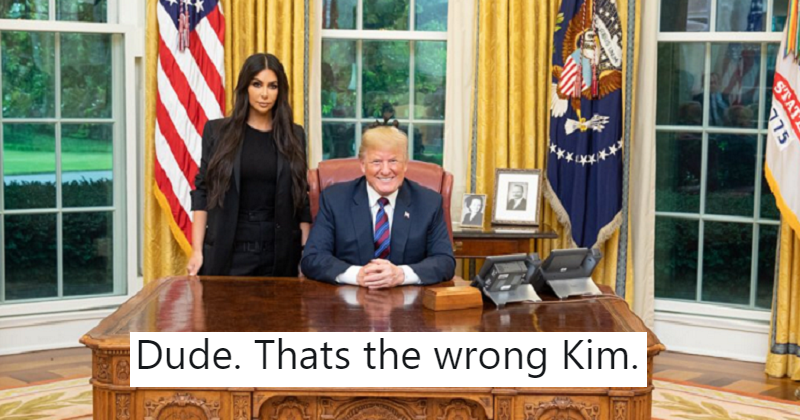 These are the 20 best comments weve seen so far:

You know the worlds gone mad when a vane, pouting, narcissistic reality TV star has such access to the Oval Office.
Also pictured: Kim Kardashian.https://t.co/97I6AkSPKB

A rarity for Kim Kardashian-West, not being the biggest arse in the room. pic.twitter.com/otWXUMrWfG

if i'm reading these hashtags right, kim kardashian has gone to meet germaine greer about islamophobia in poundland, which is about as plausible as anything else at this point

K: you going to prison Donny?
T: prolly
K: you should reform them, quickly
T: great idea. Do you wanna see my pencils? They say President Donald Trump in gold, look! https://t.co/WaAjFlRmVo

BREAKING: It appears that Trump is having meetings with the world's key influencers pic.twitter.com/CJbiGWepRs

Its only May. Ambien made Roseanne racist. Drake has pictures in blackface. I have diarrhea. Kim Kardashian met with President Trump. I still dont know who the fuck Laurel and Yanny are and Sza permanently damaged her vocal chords. What the fuck man.

Donald Trump is meeting with Kim Kardashian today. One of them is an ignorant washed up reality star with no reason for being famous whos done an extraordinary amount of damage to the nations moral fiber. So is the other.

Kim Kardashian is heading to the White House to discuss policy.

A Russian journalist dead yesterday turns up at a presser today.

North Korea won't give up nukes but will open a burger chain as consolation.

The day isn't half over.

“So, heres the pitch. Its a fish out of water story but get this, hes the president and we have Donald Trump play him. And then, heres the kicker we have Kim Kardashian play his sassy but still incompetent Chief of staff. Its like Veep meets The Purge.” pic.twitter.com/3EO9V87vAL

Tartan weaving in the Highlands has moved a step closer

Ten things you didn’t know about Mariefred, the most charming town in Sweden