Sprint cycling star Kaarle McCulloch can count on one hand the races she has left until she hits the track at the Tokyo Olympic Games.

And it will be worth the wait, she insists, with the Australians poised to hit back hard in 2020 after a frustrating Games in Rio that saw them finish 13th on the cycling medal tally with one silver medal and one bronze.

It was a fatigued McCulloch (NSW) that was in action at the national titles in Brisbane over the weekend, where she was upset in the sprint final by Victorian Caitlin Ward. That was a fairytale result on its own, with Ward the first woman not named Anna or Kerrie Meares, Steph Morton or McCulloch to win it in the past 20 years.

But McCulloch has learned not to sweat the small setbacks. She lost in the semi-finals last year before going on to win gold at the Commonwealth Games and returned to this year's titles fresh off a brilliant UCI Track World Championships in Poland, where she combined with Morton for victory in the team sprint.

They will be among the favourites for gold in Tokyo, while the pair are also aiming at individual success. With the Games now hurtling towards competitors at top speed, she knows every race from this point must count.

"I realised I have five races until the Tokyo Olympics. Im pretty buggered (at nationals) because I havent done a lot of training. I wanted to come here with some clear objectives, tactically," McCulloch said.

"There are only five more opportunities under a bit of pressure with people expecting you to win. And you get to see whether you can execute under that pressure.

"The Olympics is the highest pressure you can go to … the whole world is watching you. Ive been to two now, one as a reserve and one racing, so to come to a nationals very underdone, it feels very similar."

McCulloch said she received some criticism at the same event last year before surging to victory in the Commonwealth Games. She continues to trust in the process and refuses to shift her gaze from the big picture, which is the top of a podium in Tokyo.

"I always go out to win. But as Ive gotten a bit older and more mature, Ive realised that crossing the line first isnt always everything. Sometimes crossing the line second but executing something you need to or have been working on, thats very rewarding," she said.

"At last years nationals I copped a bit in the commentary because I did lose a couple of races. I was trying to execute something I wanted to do at the Commonwealth Games … I did that and I won. Thats the most important thing.

"When you are successful, there is always the expectation Read More – Source 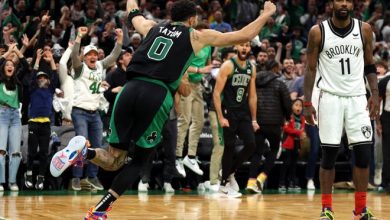 Chee Kam wins it for the Tigers as Broncos sink further