The Local- Italy’s death toll from the novel coronavirus topped 20,000 on Monday but its number of critically ill patients dropped for the 10th successive day.[contfnewc]

The 566 new deaths reported by the civil protection service take Italy’s fatalities total to 20,465 — officially second in the world behind the United States.

The drop in patients in intensive care from a peak of 4,068 on April 3 to 3,260 on Monday confirmed a general improvement in Italy’s COVID-19 trends.

The rise in new infections dropped to a new low of just two percent.

But a top Italian infectious diseases expert said data were hard to read because new cases showing up now could have occurred up to three weeks ago, given the incubation period.

“The time that passes between the moment of contagion and the moment we receive the data could be 20 days,” the ISS public health institute’s Giovanni Rezza told reporters.

“So when you read that there are 300 new cases, these cases were infections acquired 20 days ago.”

The Mediterranean country last week extended its national lockdown until May 3.

The decision has been backed by doctors but opposed by businesses that doubt they will be able to survive standing idle for three more weeks.

“There are positive signs, but the number of deaths is still high,” Rezza said.

Italy will reopen some bookshops and laundries on a trial basis on Tuesday to see how social distancing measures can be safely enforced down the road.

A study released by the Italian central bank’s research institute Monday said a two-month shutdown could shrink the country’s annual economic output by up to 11 percent. 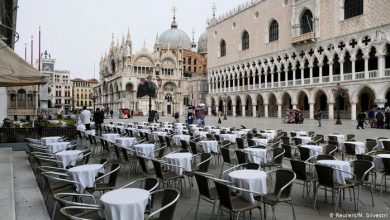 Hungary is starting to look a bit like Russia. Here’s why