Israel conducted airstrikes in Gaza for a second straight day after shells reportedly launched from the area landed in its territory. The IDF blamed Iran for the attack, claiming it supplied the unknown attackers with weapons.

The Israeli military said its warplanes targeted a Hamas position in southern Gaza late Saturday in response for the shelling carried out by the yet unidentified militants on Friday. While Israeli Defense Minister Avigdor Lieberman said it’s “too early” to name those culpable in the attack, he promptly blamed Tehran for the incident. “Iran has supplied these missiles to numerous groups,” Lieberman told Israeli media, saying that an initial examination of the shells fired “confirms they are from Iran.”

“The Iranian regime continues to risk the safety of the residents of the Gaza Strip and puts them in grave danger. Wherever the Iranian regime operates or is involved, it only wreaks havoc and destruction,” the IDF tweeted after the attack. The IDF also accused Iran of deliberately fomenting the Palestinian-Israeli conflict through its proxies – “rogue and extremist terrorist groups” – by funnelling arms to them in an attempt to reignite stalled hostilities “after years of quiet.”

Berating Iran, Lieberman appeared to heap rare praise on Hamas for steering clear of direct military confrontation, alleging that the group could no longer keep tabs on various minor formations, that are responsible for the spike in tensions. “Hamas is being careful because they do not want war, as we do not, but the Salafist and extremist Muslim groups are acting on their own,” the minister, known for his hawkish views, told Hadashot News in an interview.

The shelling took place Friday afternoon and resulted in no casualties. It was reported that two of three shells were either intercepted by Israel’s Iron Dome anti-missile system or fell in non-residential areas. One projectile, however, reportedly damaged a building in the Negev region bordering the Gaza Strip in a direct hit. The Israeli Defense Forces (IDF) said it responded by targeting Hamas outposts in northern Gaza with tank fire and airstrikes.

The shelling and retaliatory strikes comes amid violent unrest in the Israeli-occupied Palestinian territories in the wake of US President Donald Trump’s decision to recognize Jerusalem as the Israeli capital on December 6. The controversial move drew widespread international condemnation, praise from the Israeli authorities, and prompted calls for a new Palestinian uprising, a “blessed intifada” against Israel and Washington.

A wave of violent clashes between Israeli troops and Palestinian protesters in the borderline areas of the West Bank and Gaza Strip ensued. At least 14 Palestinians have been killed and some 3,000 injured as Israeli forces repeatedly fired live ammunition and rubber bullets to target the “instigators” and quell the unrest. 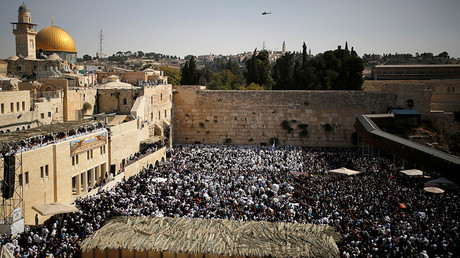 Tehran, which has been increasingly at odds with both US and Israel, joined the chorus of those denouncing the Jerusalem move, with Iran’s Defense Minister, General Amir Hatami, arguing, that if anything, it would “hasten the destruction of the Zionist regime.” Iranian lawmakers recently approved a bill that would require its government to recognize Jerusalem as the capital of Palestine.

Iran’s support for Hezbollah, which is fighting along President Bashar Assad’s army in Syria and has contributed to the dismantling of the Islamic State (IS, formerly ISIS,ISIL) terrorist group in there, has also long angered Israel. The IDF frequently struck military targets in Syria, citing the need to prevent arms transfers to Hezbollah.Tel Aviv claims Tehran is trying to secure foothold in Syria to attack Israel, with PM Benjamin Netanyahu contending that Iran shares Nazi Germany’s “ruthless commitment to murder Jews.”

Another lingering point of contention is the historic Joint Comprehensive Plan of Action (JCPOA )nuclear deal, which has repeatedly been slammed by Tel Aviv and Washington as inherently flawed. The US and Israel further said the landmark agreement will enable Iran to continue pursuing its nuclear programme and develop WMD, despite Tehran’s assurances that their nuclear ambitions are entirely peaceful. The UN's nuclear watchdog, the International Atomic Energy Agency (IAEA), has on numerous occasions confirmed that Iran is in full compliance with the multilateral agreement.

Win or die: The secret to surviving in Game of Thrones? Forget about loyalty, scientists say