rfi– France’s national assembly on Monday dropped a key provision of a controversial bill that would have curtailed the right to film police officers during their work.

Christophe Castaner, the head of President Emmanuel Macron’s ruling LREM party, told journalists that the bill will be scrapped and rewritten, with a new version going before parliament.

The draft bill had sparked widespread protests across France, with tens of thousands of people demonstrating in Paris on Saturday calling for the government to drop the proposed law.

The bill had been criticised by press freedom watchdogs and civil rights activists who said it would stop reporters and others from being able to document police misconduct, as well as undermine efforts to record instances of police brutality.

The ability to document police behaviour was highlighted last week as a video emerged of a black man severely beaten by four French police officers.

The so-called “global security” law was in part a reaction to requests from police trade unions, arguing it was needed to provide better protection for French cops.

The bill would have prevented recognisable images of police officers from being published on social media over fears they would suffer recriminations for doing their jobs.

French Interior Minister Gérald Darmanin claimed that only 0.3% of some 3 million police operations carried out in France per year end up filed on a government website that deals with police abuses.

Critics argue that French police have hardened their tactics during demonstrations or during arrests. The 2018 Gilets jaunes movement, characterised by protesters wearing yellow vests, resulted in hundreds of complaints against police officers. 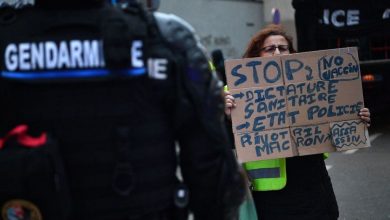