france24– As France seeks to ease its Covid-19 lockdown and stem the virus’s spread, French President Emmanuel Macron this week proposed compelling those infected to isolate from others. His prime minister Jean Castex followed suit and promised draft legislation on the matter soon. Already, though, the prospect of forcing people to fall in line on coronavirus has been met with scepticism – and raised plenty of questions – even on Macron’s own side of the political aisle.

Detailing his roadmap to bring France’s second lockdown to an end during a televised address on Tuesday, Macron said he wanted “the government and Parliament to provide for conditions to insure the isolation of contaminated people, including in a more constraining way”. The president also pledged to support those affected “in material, health and psychological terms”.

How was Macron’s proposal received? In a word: Isolation, sure. Forcible confinement, maybe not.

Castex, for his part, said the intention isn’t “control for controlling’s sake” but to “have a constraint that is better respected” and one that will be supported “by reinforced human and medical resources” so that “this isolation will be better accepted and therefore more effective”. The prime minister didn’t specify what the new measures would look like.

As France waits to hear more, the question marks grow. How does the government expect to issue such new coercive measures? What will the punishment be for non-compliance? How will the state support coronavirus-infected individuals “materially and psychologically”? All of which are considerations Macron wants to open for debate.

One thing is certain, lawmakers are already pondering the possible details and thrashing the issues out.

Gérard Larcher, the conservative speaker of the Senate, suggested they tread carefully given that what’s at stake is no less than impinging on a “fundamental freedom”. The veteran senator seemed to brush aside Macron’s appeal for lawmakers of all parties to merely debate the issue on the floor and hold it to a vote, saying the matter “deserves a debate from top to bottom, which only draft legislation can bring”.

“A parliamentary debate isn’t sufficient. Real debate in Parliament is when there is draft legislation and it isn’t enough for us to debate and have a vote,” Larcher told Europe 1 radio on Thursday. “If there must be constraint, it must respect a certain number of conditions: Respect of doctor-patient confidentiality, support for people, what the clauses of this isolation are.”

The Socialist minority leader in the lower-house National Assembly, for her part, said she didn’t think isolating people was a good idea. “If we have coercive measures, French people will no longer go get tested”, Valérie Rabault told Sud Radio. “It’s much riskier as a strategy than having an incentivised strategy.”

The far-right isn’t pleased with the idea, either. National Rally leader Marine Le Pen questioned the logistics of a plan that makes isolation mandatory. “There comes a time when you have to face reality: Are we going to send police officers to the homes of people who test positive to see if the people are really home?” she asked Wednesday on Sud Radio, suggesting the government “stop taking decisions it can’t put into practice”.

Le Pen’s second-in-command, National Rally Vice-President Jordan Bardella, also wondered how feasible the measures would be and said he would rather “convince than constrain”. The European Parliament lawmaker said he is “irritated” by the government’s “permanent infantilising” of French people.

Doubts persist, too, within the ranks of Macron’s centrist majority. Former interior minister Christophe Castaner, who is now the lower-house majority leader for Macron’s La République en Marche party, has remained prudent, saying he supports compelling infected people to isolate, but only if doctor-patient confidentiality is respected.

“I’m in favour if we manage to guarantee… medical secrecy, which is the domain of the state health insurer. The monitoring needs to take place within that framework,” Castaner said Wednesday on LCI television.

“If, on the other hand, it’s a file where you or I, if we have Covid-19… find ourselves in a file that is widely distributed, including to internal security forces, to the police, to the gendarmerie for conducting checks in the street, I’m against,” explained Castaner, who oversaw law enforcement as interior minister for nearly two years until July.

Last Friday, meeting carers at a hospital in Brittany, Castex himself displayed scepticism over the notion of mandatory isolation. “I am persuaded that there are people who, if you tell them ‘you have an obligation to isolate yourselves’, they will not get themselves tested,” the prime minister told the healthcare workers.

Indeed, politicians aren’t the only ones expressing reservations over obliging compliance. Healthcare providers in France aren’t certain it would work, either.

“The interest of mandatory isolation is limited,” Dr Jean-Paul Harmon, a Paris-area general practitioner and honorary president of the French Federation of Doctors (FMF), told the 20 Minutes news site. “I’m not really convinced that passing an additional law, that is coercive, is necessary. People are contagious even before having symptoms, so they contaminate their entourage before they’re tested, [and] so before they are subject to any possible mandatory isolation.”

Macron’s fledgling proposal does dovetail with the appeal that one healthcare collective has been making. The France Assos Santé group represents 85 healthcare-user associations and has been pleading for the government to impose coercive coronavirus measures. The collective wants stricter isolation with “a complete restriction on movement and visits” for those who test positive and the contact cases in their circle. The goal, they say, is simple: To avoid a third lockdown.

Legally speaking, “a law that coerces a patient to isolate is conceivable in principle as long as it is limited in scope since the public health objective takes precedence over everything else,” Jean-Philippe Derosier, a public law professor at the University of Lille, told FRANCE 24. “But it is a good bet that coercion, in these circumstances, is less well-suited than efficiently educating the public would be. Similar measures applied in other countries have not necessarily proven effective.”

Mandatory isolation rules reinforced by sanctions have already been put into place by France’s neighbours in Europe, including Switzerland, Britain and Belgium.

In Italy, infected individuals who don’t respect their quarantine restrictions face three to 18 months behind bars and fines from €500 to €5,000. The rules are even more strict in Spain; there, first-time offenders are subject to a €3,000 fine, while someone repeatedly violating isolation rules risks a penalty of up to €600,000.

Greece has the strictest punishment; any infected person found violating Covid-19 quarantine rules – without contaminating anyone else – faces five years in jail. That penalty can rise to 10 years if the offender has infected at least one other person while violating the rules and up to 15 years if that contamination causes death. If the quarantine-breaker infects several people who die, the penalty can be life in prison.

Other countries have gone further in terms of the means in place to monitor isolating coronavirus-infected patients. South Korea has turned to technologies like smartphone data tracing to enforce quarantine rules and has gone so far as to impose that an infected person who hasn’t respected isolation rules be fitted with an electronic monitoring device.

France isn’t there yet. But the attempt to isolate people without coercive measures during the first lockdown in the spring had a manifestly limited impact; the hotels and other establishments requisitioned for the purpose then stood largely empty. Questions also remain over how to tend to infected people’s social connections, considered so important during this difficult period, particularly in terms of the mental health of society’s most vulnerable. All are elements French lawmakers will have to consider in the days to come. 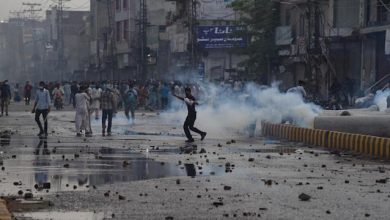 Moscow expels 60 US envoys and closes consulate in retaliation