ATHENS — The next Greek election could turn on three whistleblower testimonies accusing some of the countrys top politicians of taking bribes from a Swiss pharmaceutical giant.

The three anonymous accounts are part of a Greek judicial investigation into whether Novartis paid off top government officials to spend public money on the companys products.

The allegations of high-level corruption in the wake of the 2008 financial scandal — at a time when hospitals were running out of gauze and clean sheets — have set off a political storm and split the crisis-wracked country, as it heads toward a general election no later than next year.

To officials from the ruling left-wing Syriza party, theyre evidence of criminality among their hated predecessors from the right. To the probes targets, who all deny wrongdoing, the investigation is nothing more than an attempt to rig the coming election by discrediting the largest opposition parties. Novartis says it has launched its own investigation and wont comment on the allegations.

“If prosecutors manage to charge a former prime minister or other senior officials it would be a huge blow to the opposition in Greece” — Maria Gavouneli, associate professor of international law

Prosecutors are investigating 10 former government officials, including two former prime ministers —Antonis Samaras and Panagiotis Pikrammenos — as well as the European Migration Commissioner Dimitris Avramopoulos and the current central bank governor, Yannis Stournaras. Nearly all those being investigated are members of the conservative New Democracy party, which has been dominating in the polls.

“If prosecutors manage to charge a former prime minister or other senior officials it would be a huge blow to the opposition in Greece,” said Maria Gavouneli, associate professor of international law at the Kapodistrian University of Athens. “If nobody is prosecuted, however, the current government will be massively discredited.”

The anonymous testimonies were taken by Greeces chief anti-corruption prosecutor, Eleni Touloupaki, and sent to parliament in February under a clause in the constitution obliging the justice system to notify lawmakers should either a minister or deputy minister be named in relation to a corruption inquiry.

“I cannot speak on behalf of the accused, but there is definitely a political agenda in what is being told as part of these testimonies,” said Stefanos Komninos, who was secretary-general of the ministry of economy, shipping and competitiveness from 2009 to 2014. 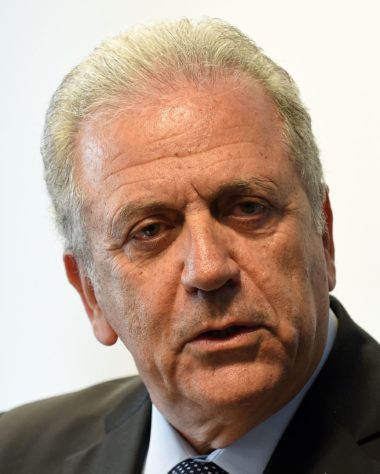 Komninos is not one of the 10 senior politicians under investigation, but his name does appear in one of the anonymous testimonies — obtained by POLITICO — where he is accused of accepting a bribe from Novartis in the form of “bundles of cash wrapped in orange tapes.” In an interview, he denied the allegation and said he worked to lower drug prices while in office.

The testimonies, which were given under oath, contain several other similar tales of government officials receiving bribes in the form of bundles of cash.

Prime Minister Alexis Tsipras and his ruling Syriza party rode to victory in 2015 by promising to crack down on corruption and put an end to austerity measures that had left Greek voters disillusioned with a political elite they considered corrupt and financially reckless. But its support has been slipping.

No charges have been filed in the Novartis investigation. Two officials in Touloupakis office told POLITICO that formal charges against public officials are expected in the coming months.

One interview conducted under oath with a whistleblower who used the pseudonym “Aikaterini Kelessi” describes a scene in mid-2013 when then-Vice President of Novartis Greece Konstantinos Frouzis visited the prime ministerial mansion of Antonis Samaras, who ran the Greek government from 2012 to 2015.

“He [Frouzis] had with him a black, wheeled Samsonite suit case, which he had filled with bundles of cash with purple, yellow and green ties and gave to Antonis Samaras,” reads the testimony seen by POLITICO. Samaras has denied the allegations and accused the government of using fake witnesses to tarnish its rivals.

Another interview conducted by Greek prosecutors focuses on meetings that took place between Frouzis and Yannis Stournaras, the central bank governor who previously served as finance minister between 2012 and 2014. Stournaras allegedly received “an amount of at least €1 million as gifts” on one occasion, according to a transcript seen by POLITICO.

“These testimonies are in their entirety and completely false,” Stournaras told a session of the Greek parliament on February 21, referring to the whistleblower statements that have been reported by the Greek press. 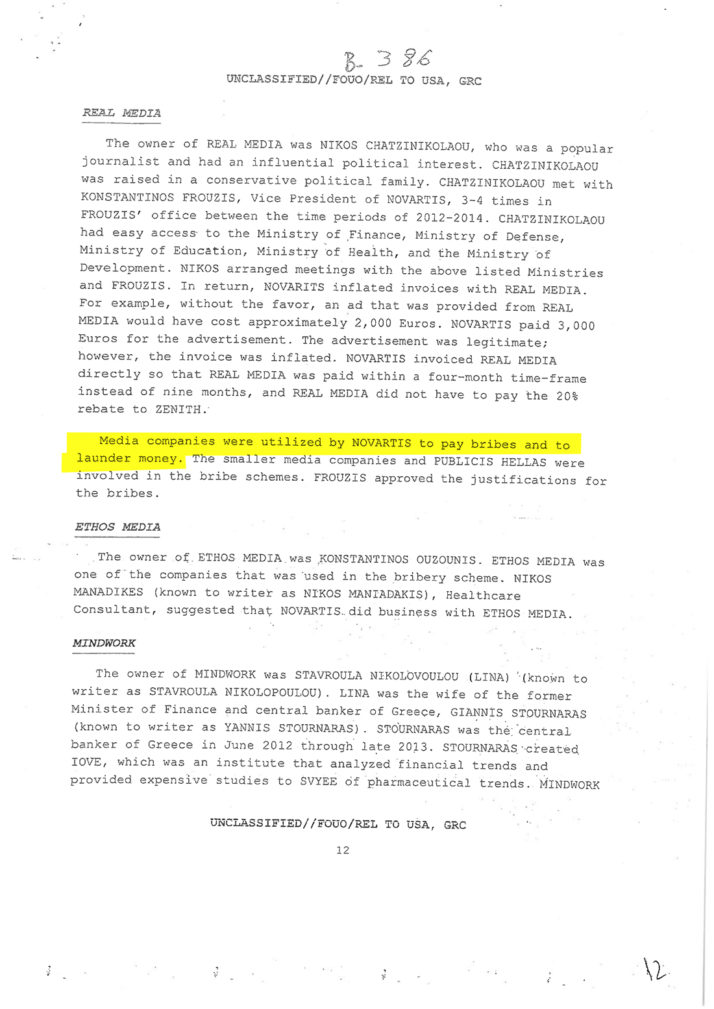 A segment from a document provided by the U.S. Federal Bureau of Investigation to Greek judicial authorities looking into bribery allegations against Novartis.

Frouzis is also the subject of an investigation by the U.S. Federal Bureau of Investigation, the Department of Justice and the Securities and Exchange Commission into whether Novartis violated the U.S. Foreign Corrupt Practices Act.

According to an FBI report obtained by POLITICO and shared with the Greek parliament, the agency uncovered evidence that Novartis bribed doctors who prescribed the companys drugs and destroyed documents to hide its activities from Greek regulators.

The report alleges that Frouzis used a series of Greek public relations firms to launder cash and pay bribes to doctors and government officials in exchange for arranging access to the Greek ministries of finance, defense, education, health and development.

The PR company that got the largest chunk of laundered cash allegedly paid by Novartis to sway Greek politicians was Voulkidis, according to the report. In one case highlighted by investigators, the company produced an online football advertisement for Novartis that ran unchanged for years.

Voulkidis did not reply to several requests for comment. 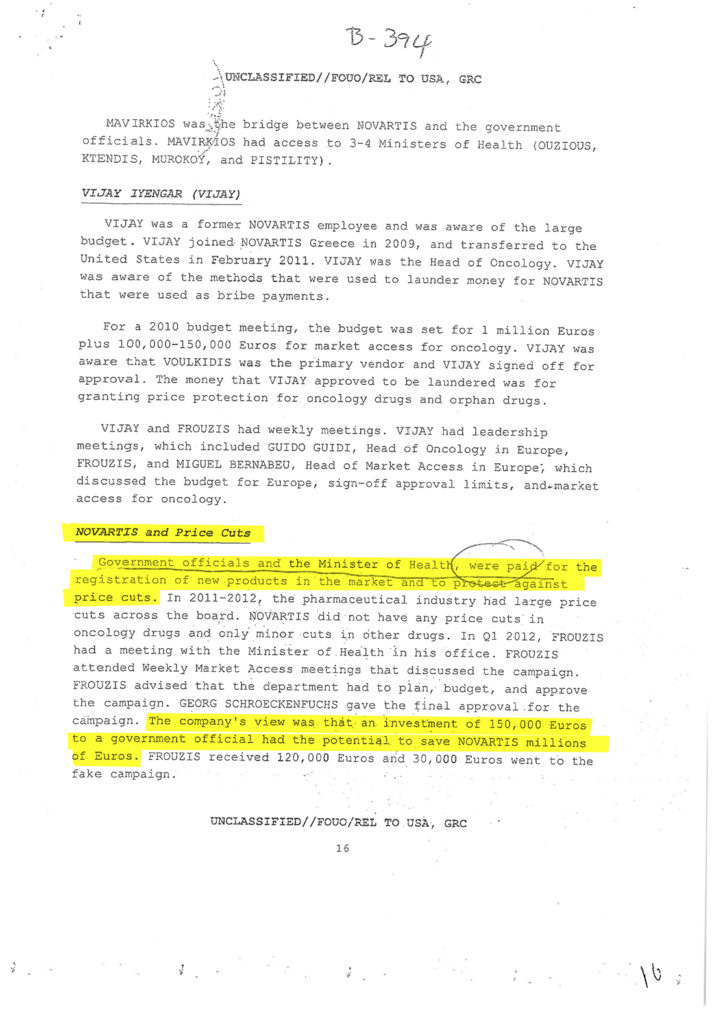 A segment from a document provided by the U.S. Federal Bureau of Investigation to Greek judicial authorities looking into bribery allegations against Novartis.

“Voulkidis took one picture and used the same picture for five consecutive years,” the FBI report reads. “That money was used to bribe government officials.”

“Government officials and the minister of health were paid for the registration of new products in the market and to protect against price cuts,” the report continues. “In 2011-2012, the pharmaceutical industry had large price cuts across the board. Novartis did not have any price cuts in oncology drugs and only minor cuts in other drugs.”

Frouzis, who left Novartis in 2015 and now works for a food and beverage manufacturer in Greece, declined to comment for this article. “Due to the very early stage of the investigation in the Greek territory I prefer to refrain from sharing views and opinions on this matter,” he said in an email. 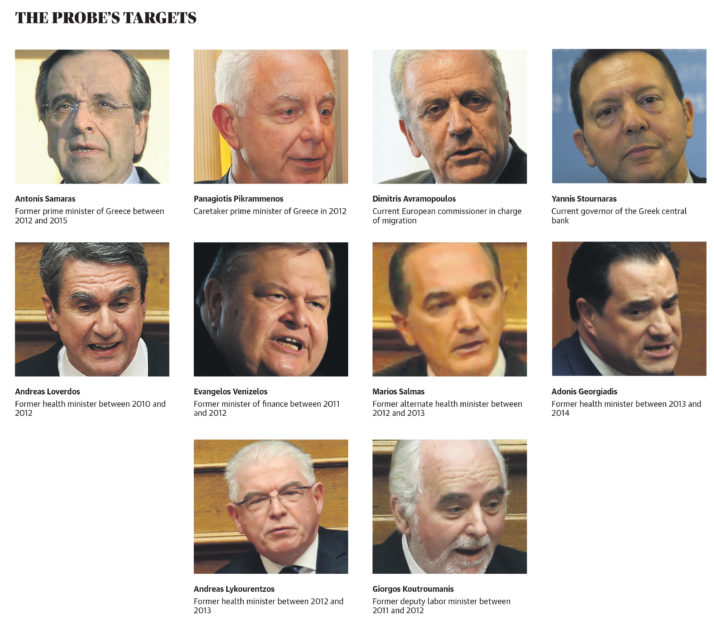 Barrett said Novartis is cooperating with requests from local and foreign authorities.

“We have also been conducting our own comprehensive internal investigation,” he said. “If any wrongdoing is found we will take fast and decisive action and do everything possible to prevent future misconduct.”

Barrett added: “At the same time, publicity around the case has included many sensational and unfounded claims in a politicized debate of which Novartis should not be a part, often directed with little or no sensitivity at our employees. We believe this is highly inappropriate and will defend our people and company against these claims.”

Maria Spyraki, a member of the European Parliament and spokesperson for the opposition New Democracy party, said that nothing in the documents released by Greek investigators so far provides hard evidence of any wrongdoing by senior politicians in Greece. “It is important for all the Greek people to know the truth and to have everything in the light and everything transparent,” she said. “But the witnesses are not enough.”

She added that the Greek parliament committee investigating Novartis had found no specific evidence incriminating any public official in Greece. Earlier this month, the Greek parliament axed an investigation into the matter citing a lack of evidence, with lawmakers voting to send the entire case back to the countrys judicial authorities. The decision was a blow to the ruling Syriza party who had wanted to keep the case in the public spotlight.

In January, New Democracy also filed official questions to the minister of justice, Stavros Kontonis, asking him to explain how he plans to shelter the Greek judiciary from political influence amid allegations that those who have been accused are personalities that the ruling Syriza party would like to see tarnished.

In Greece, the government — in collaboration with the countrys national medicines agency — sets drug prices after negotiating with pharmaceutical companies.

Samaras has filed lawsuits against Touloupaki, Tsipras and Deputy Justice Minister Dimitris Papangelopoulos accusing them of defamation and slander. Evangelos Venizelos, a former finance minister, has also petitioned a court to force one of the whistleblowers to reveal his or her identity.

Stefanos Komninos, the former secretary-general of the ministry of economy, shipping and competitiveness, is accused in one witness statement of having kept the price of a box Galvus, a type 2 diabetes drug, at €300 instead of €150. In Greece, the government — in collaboration with the countrys national medicines agency — sets drug prices after negotiating with pharmaceutical companies.

Komninos told POLITICO in a telephone interview from Athens that he lowered the price of the medicine by 20 percent in 2010, resulting in a saving of €1 billion for the state. Komninos said that on September 3, 2010, a ministerial decree was issued by the government lowering the retail price of Galvus by 38 percent to €41.14 for one pack — a figure far lower than those cited in the anonymous testimonies.

A public database of Greek drug prices verifies Komninos account. It also shows that the price of Galvus continued to fall, hitting €21.45 on February 22 this year. 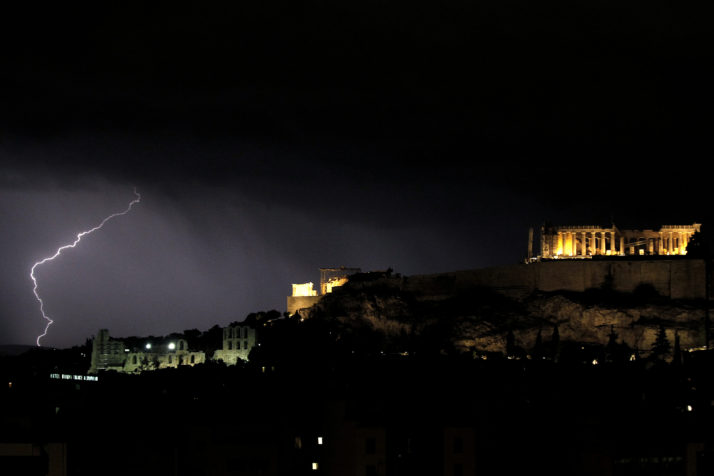 “I was working with my minsiter Louka Katseli for decreasing the total price for Greece,” Komninos said.

The allegations against Novartis in Greece come as the Swiss concern announced earlier this month that its general counsel would retire from the company in connection with a $1.2 million payment to a company owned by Michael Cohen, U.S. President Donald Trumps longtime personal lawyer.

The Greek government said it is “committed to put an end to corruption and to not allow any cover up of the cases that hint towards corruption of public officials.”

“It is public knowledge that one of the root causes of the crisis is widespread corruption among the ranks of the parties that constituted the old establishment,” a government spokesperson said.

Read this next: Populist plan for 2019 election puts EU in cross hairs