A rescue worker has tearfully described the toddler he pulled from debris following devastating mudslides in Southern California as a "muddy doll".

Berkeley Johnson said the two-year-old girl was taken to hospital and suffered an injury to her hip.

Rescue efforts are under way in Santa Barbara County for residents trapped by mudslides that overwhelmed an area scorched by wildfires last month.

At least 15 people have died and more than two dozen others were injured.

"This was an hour of rain, and the house was gone," he said of his home in the community of Montecito.

Mr Johnson said he and his wife, Karen, heard a baby crying after the flooding had subsided and they managed to climb down from the roof of their swamped home.

The pair joined a fireman to dig the toddler out, scooping mud from her mouth before she was taken to hospital.

"Had we not gone over there, I don't think that kid would have [survived]", he added.

More than 50 people have been rescued already but many places are still inaccessible. Several roads are closed, including the major Highway 101.

Some 163 people have been taken to hospital. Twenty had "storm-related injuries" and four were critically hurt.

Ms Winfrey said on Instagram that her property sustained only minor damage as she toured the scene.

The first rain in months caused mudslides when it hit ground that had been burned by December's huge wildfires.

After a wildfire, burned vegetation and charred soil create a water repellent layer which blocks water absorption. Together with the loss of vegetation, this leads to an increased risk of mudslides and floods.

The Federal Emergency Management Agency (FEMA) says the risk of flooding stays "significantly higher" for up to five years after a wildfire.

"Recent burn areas will be especially vulnerable where dangerous mud and debris flows are possible," said the National Weather Service in a statement.

In some places mud was waist-deep, officials said.

Thousands had to leave their homes, many for the second time in two months. The emergency services declared an exclusion zone, saying anyone moving around the area would be in the way of rescuers and would be subject to arrest.

Those who have stayed in the area have been warned to boil their tap water before drinking it.

Heavy rain run-off caused a mudflow in the community of Montecito, where some homes were knocked off their foundations, said Santa Barbara County Fire Department spokesman Mike Eliason.

County Fire Captain Dave Zaniboni said that five people were found dead on Tuesday in Montecito, possibly as a result of the storm.

Interactive Montecito before and after 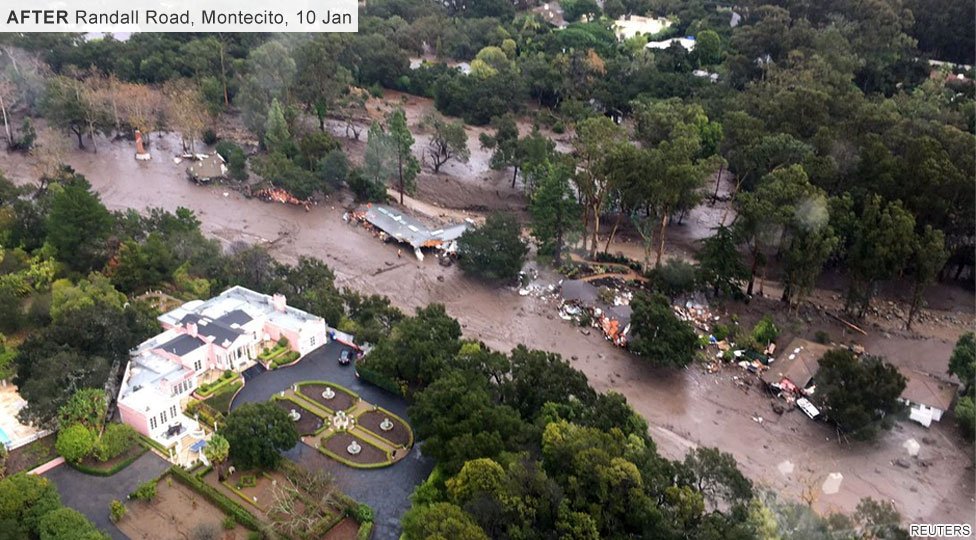 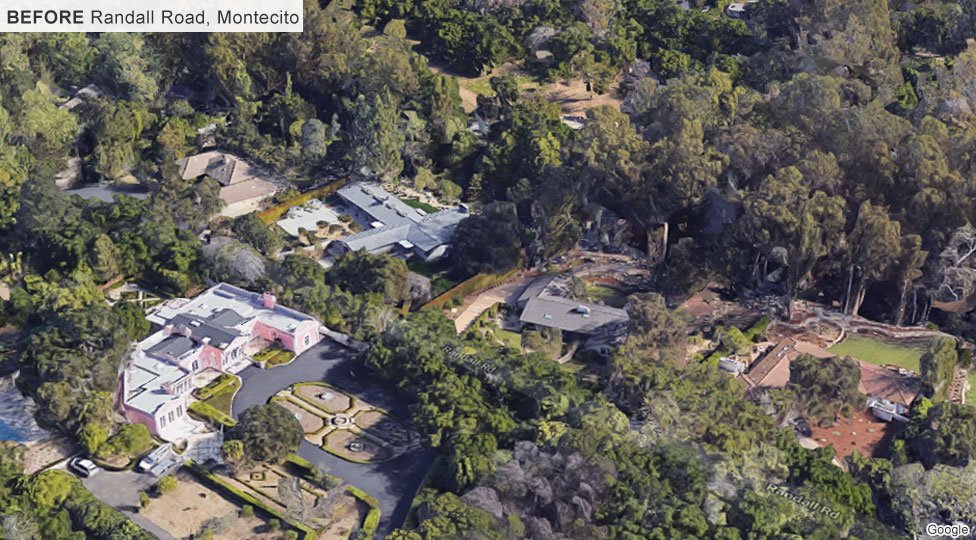 The US Coast Guard has sent "multiple airships to support rescue operations" and warned the public not to fly drones, otherwise the flights would be grounded.

This comes after a record-setting year of $306bn (£226bn) of weather and climate-related disaster costs in the United States, with 2017 the third warmest year on record, according to the US National Oceanic and Atmospheric Administration.

California has suffered severe drought in five out of six of the past years.

In December, California Governor Jerry Brown said the state was "facing a new reality" as climate change meant wildfires could erupt "every year or every few years".

Have you been affected by the mudslides in Southern California? If it's safe to share your experiences then please email [email protected].

Please include a contact number if you are willing to speak to a BBC journalist. You can also contact us in the following ways:

Heres how to safely cycle through the Swedish winter

Columnist: The Media Lost Interest in Russia Collusion Story When Their Role in It Was Exposed