Mark Andre was marking trees in one of the most remote spots in California’s Redwood Coast, USA, when he spotted a lonesome shack.

The sturdy structure measured around eight by 12ft wide and around 15ft high.

He immediately recognised that it was no ordinary campsite anomaly, though.

There was no fire, waste or evidence that anyone had been there previously.

The man quickly realised this was something out of the ordinary and headed back to seek assistance from professionals. 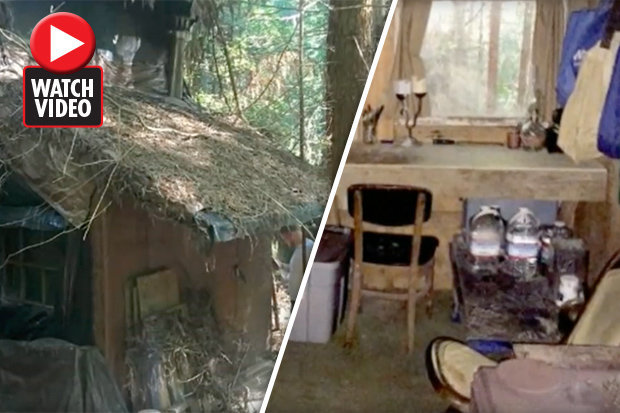 MYSTERIOUS: The man discovered the house deep in the woods

The group decided that if someone had been living there, there could be a chance they were incapacitated, or worse, and so leaving them would be irresponsible.

But after multiple attempts to reach anyone who may be within, the group decided to break the lock.

Inside they discovered the tiny home vacated – but some of the possessions amazed them.

Neat shelves had been built, with a number of jars and cans organised to perfection.

They also saw a rocking chair posed in the corner, accompanied by a pot-bellied stove, vintage typewriter and a small library.

Thick curtains and small wooden panels covered the window to keep out light.

Whoever had lived in the small building had been self-sufficient for a number of years.

But little identification papers could be found.

As a result, the only action they could take, was to leave an eviction notice.

But when authorities returned to see out the contract, they were stumped by what they found.

The cabin had been totally deconstructed.

All of the contents, including any trace that anyone had been there had vanished.

The only thing that remained was a charcoal symbol left on the ground – often associated with squatters.

The clip was uploaded to YouTube channel Did You Know? on February 10 and has racked up over half a million hits since.

And viewers are equally amazed by the story.

One comment read: “Clearly whoever lived there wanted to be left alone.

“At least they showed us how to properly clean up after ourselves.”

And another added: “He was probably 50 yards away watching them the whole time.”