CNN– President Joe Biden on Friday attributed the disappointing September jobs report to the ongoing Covid-19 pandemic but sought to frame the new data as steady progress toward the nation’s economic recovery.

In a speech at the White House, Biden pointed to the specific week when the survey for the monthly jobs report was done as one reason the number of jobs added in September fell below expectations.
“Today’s report is based on a survey that was taken during the week of September 13. Not today, September the 13th — when Covid cases were average more than 150,000 per day,” Biden said. “Since then, we’ve seen the daily cases fall by more than one-third and they’re continuing to trend down, and we’re continuing to make progress.”
In a troubling sign that Covid is still disrupting the economy, the new jobs report indicates that US employers added only 194,000 jobs in September.
September marked the second-straight month in which the US economy added far fewer jobs than expected. Jobs growth slowed down dramatically in August.
The unemployment rate declined to 4.8% in September, the Bureau of Labor Statistics said Friday, down from 5.2% in August. Joblessness declined across the board, with the Black unemployment rate falling the most of any group — to 7.9% from 8.8% in August.
Biden cited those statistics in trying to put a positive spin on the report.
“Today’s report has the unemployment rate down to 4.8%, a significant improvement from when I took office and a sign that our recovery is moving forward even in the face of a Covid pandemic,” Biden said.
The President said that the new report shows “we’re actually making real progress,” shrugging off concerns in Washington about the jobs numbers not meeting their targets.
“Right now, things in Washington, as you all know, are awfully noisy. Turn on the news and every conversation is a confrontation. Every disagreement is a crisis. But when you take a step back and look at what’s happening, we’re actually making real progress,” Biden said. “Maybe it doesn’t seem fast enough. I’d like to see it faster and we’re going to make it faster. Maybe it doesn’t appear dramatic enough. … We’re making consistent and steady progress, though.”
The President also used the speech to make the case for his infrastructure and social safety net legislative agenda.
“We need to stay focused on what these bills mean for the people, who are just looking for a little bit of breathing room, a fair chance to build a decent middle-class life, to succeed and thrive instead of just hanging on by their fingernails,” Biden remarked. “We need to keep an eye — an eye — on what’s fundamentally at stake for our country: the ability to compete and win the race of the 21st century as we did in the 20th century.”
Labor Secretary Marty Walsh told “CNN Newsroom” on Friday that there were some “bright spots” in the report, including the women’s participation unemployment rate down to 4.2% and unemployment among Black women is down to 7.3%.
“This is not all doom and gloom here today. Certainly, we know, I would love to be on this show saying we added 3 million jobs to the economy and now we can go on to something else, but unfortunately we’re still — we’re not there yet,” he conceded.
As for what this portends for Democratic negotiations on the Biden economic agenda, Walsh made the argument that the weak job growth bolsters the need to pass the President’s legislative priorities.
“I would hope that, you know, members of Congress and members of the Senate today look at this jobs report and see where the shortfalls are and understand that these investments that the President wants to make in these areas will have long-term, lasting, positive impacts on our economy moving forward,” he continued.
The White House released a report on Thursday highlighting support for vaccine requirements across business and labor communities.
The report also details the positive economic effects among communities with high vaccination rates, including that “small business employee hours grew faster and stayed higher during the rise of the Delta variant in the states that have higher working-age vaccination rates, versus states with lower vaccination rates.”
Tags
Biden Covid

How beaches are preparing for Memorial Day during the pandemic 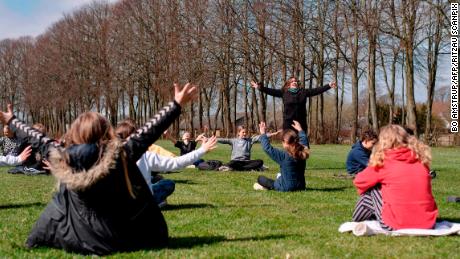