independent– The damaging practice of burning grouse moor peatlands will be partially banned in England, ministers have announced, prompting criticism that the measure does not go far enough.

Some conservationists cautiously welcomed the crackdown, which will mean shoot organisers will no longer be allowed routinely to set fire to heather on ecologically sensitive sites.

But the ban comes with exceptions, and wildlife experts say more urgency is needed to help tackle the climate crisis.

The ban will apply to blanket bogs – peat more than 40cm deep – on a Site of Special Scientific Interest (SSSI) that is also a Special Area of Conservation or a Special Protection Area unless a licence has been granted or the land is steep or rocky.

Environmentalists have for many years condemned the practice of setting light to upland peatlands that are rich in wildlife, which is done in winter to ensure grouse have new, more nutritious shoots of heather to eat before they are shot for sport.

But the burning releases carbon into the atmosphere, adding to the climate crisis. The UK has 13 per cent of the world’s blanket bog, which store more than 3,000 million tons of carbon.

Advocates of the burning say it protects areas from wildfires, and that differently aged heathers protect threatened ground-nesting birds.

The new ban also does not apply where scree makes up half the land area. And environment secretary George Eustice may also issue burning licences for “wildfire prevention, for a conservation purpose or where land is inaccessible to cutting or mowing machinery”. These licences may last several years.

Luke Steele, of Ban Bloodsports on Yorkshire’s Moors, said: “England’s grouse moors are woefully under-regulated so we welcome today’s announcement that burning on fragile blanket bog will no longer be routinely allowed in many areas.

“However, the legislation does not go far enough, given it fails to end burning on degraded shallow peatlands, which need restoring to their healthy, deeper state.

“In the midst of a climate emergency, there is no justification to allow fires to be set on any carbon-rich peatlands.”

More than 660 fires have been started on grouse moorlands in Yorkshire alone since 2018, according to new research by Mr Steele’s group.

The Wildlife Trusts questioned why the ban was only partial, saying: “If, in some places, the reason they are burnt is to prevent wildfires spreading over dry ground, the best way to stop fire happening is to block ditches and help the peat become wet again.

“It is deeply frustrating that it has taken so long for the government to commit to this – 14 months after it was first promised.

“It will be extremely embarrassing if we are still burning any of our peatlands when the climate conference meets at the end of the year.

“The government’s own advisers say we need to restore all upland peatlands to meet climate targets. So while it’s a tiny step forward, much greater urgency is needed across a huge range of comparably burning issues to protect our wildlife and tackle climate change.”

The government says the ban will help achieve net-zero carbon emissions by 2050 as well as protecting habitats and their biodiversity.

Natural England chairman Tony Juniper said: “This is a hugely welcome announcement that will see better protections for our globally important peatlands.”

The government says it will set out further steps to protect peatlands this year and a £640m Nature for Climate fund will launch a programme of peatland restoration. 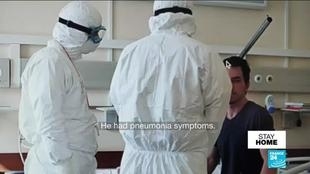