They say “theres always a tweet” to match anything going on in Donald Trumps tumultuous world, and theyre right. The President has recently roundly endorsed his former opponent, the heavily pro-gun Senator Ted Cruz, who is running for re-election in Texas. He posted this.

I will be doing a major rally for Senator Ted Cruz in October. Im picking the biggest stadium in Texas we can find. As you know, Ted has my complete and total Endorsement. His opponent is a disaster for Texas – weak on Second Amendment, Crime, Borders, Military, and Vets!

Sounds as though he has the utmost belief in Senator Cruz suitability for the position, right? Which is weird, because …theres a tweet.

Why would the people of Texas support Ted Cruz when he has accomplished absolutely nothing for them. He is another all talk, no action pol!

And Im just going to leave a little screenshot here, in case the man-baby masters the delete button. 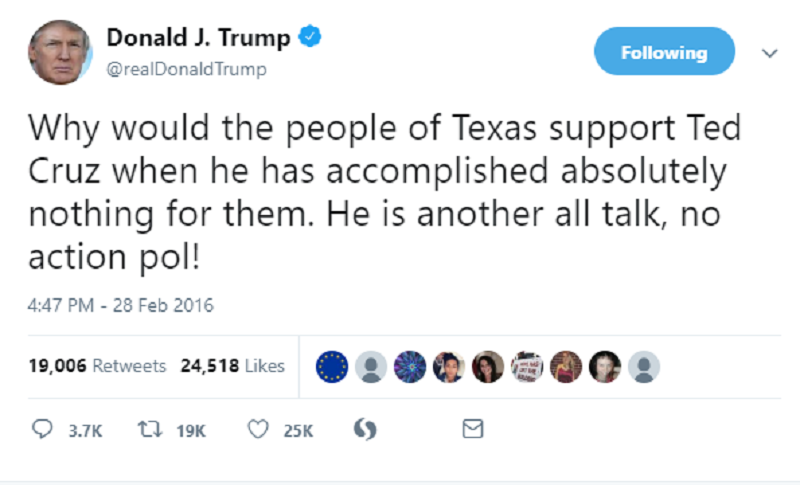 Its pretty embarrassing, really, and its been seen by millions of people – he must be so relieved that its only on Twitter and not freely available for people to see out in the real world, particularly in Texas. Erm …

Anti-gun activist thought the tweet would make a good billboard.

Can someone in Texas get this on a billboard? https://t.co/Y5vhQDAW0d

Update: the billboard is happening thanks to all who contributed

Although the billboard will be a mobile one, attached to a truck and travelling around the State of Texas, someone mocked up how the poster might look.

We look forward to reading the Presidents reaction tweets when the billboard makes the news.

Three men died after having foursome with a woman at hostel

Has the governments silence on Brexit now become untenable?