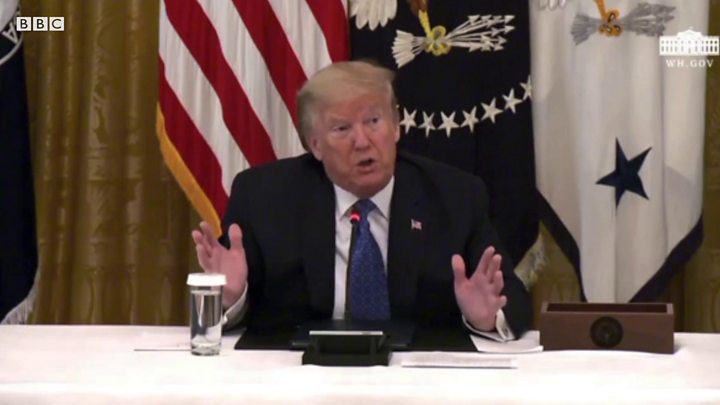 As the country's death toll surpasses 92,000, all 50 US states have partially reopened after a two-month shutdown.

On Wednesday, Connecticut became the final state to lift restrictions when it gave the green light to shops and restaurants under certain conditions.

But wide discrepancies remain between states in terms of infection rates and the pace of their economic restart.

Many have not met the federal guidance on how to reopen, including a 14-day "downward trajectory" of cases.

The District of Columbia is expected to announce its reopening next week.

Countrywide, the US is seeing an overall downward trend in new cases and deaths over time.

Some of the hardest-hit areas, including New York, New Jersey and Washington state are now showing the sharpest declines, while majority of states have reached plateaus. Still, states like Arizona and North Carolina continue to report increases.

What are different states doing?

Many like Connecticut have started with a state-wide approach, with varying degrees of restrictions.

In Maryland, for example, residents must stick to outdoor recreation, including golf courses, beaches and campgrounds, while states like Oklahoma now allow residents to attend religious services, get a tattoo, and even spend an evening at a nightclub.

In California, for example, some restaurants and retail locations will be allowed to open, but only in counties that meet standards for testing and declining infection rates.

The guidelines may be loosened, however, if DC meets a series of reopening metrics set out by Ms Bowser, including a two-week decline in community spread of the virus.

What does the new guidance say?

In 60 pages of guidance released by the Centers for Disease Control this past weekend, the centre provides detailed guidance to particular sectors.

In schools, for example, desks must be placed six feet apart and face the same direction, with temperature checks for all staff and students.

In restaurants, the CDC advises establishments open first with limited seating to allow for social distancing, and place higher-risk workers in roles that limit their interaction with customers.

And states are adviseRead More – Source