It's a belief that's stuck like a tick in the collective memory of some white conservatives. It's the notion that black people despise Clarence Thomas because he's a conservative.It's not only a myth but a con. Here's why it matters now.We are about to hear a lot about, and from, the only black member of the US Supreme Court. A new Thomas biography, "The Enigma of Clarence Thomas," is generating buzz. A new PBS documentary, "Created Equal: Clarence Thomas in His Own Words," comes out next year. And a Washington Post writer recently dedicated an entire column to Thomas, calling him "an American hero."It's all adding up to another public reappraisal of arguably the most conservative member of the Supreme Court. He's someone more people would revere if they only knew him better, says columnist Kathleen Parker.Here's my question to people who say or imply black people revile Thomas because he's a conservative: If black people are so opposed to conservatives, why have so many accepted black conservatives such as Booker T. Washington, Colin Powell and Condoleezza Rice?If there is going to be a reevaluation of one of the most powerful black figures in the US, it's time we ground it in facts, not myths.Thomas isn't despised in the black community because he's a conservative. Many dislike him because they see him as a hypocrite and a traitor.Yet many white conservatives keep recycling the same selective stories about Thomas. These stories don't just distort black culture — they carry an undercurrent of racism.

He's not the only black leader who talks about self-reliance

Start with the way conservatives celebrate Thomas' upbringing.They love to tell tales about his rugged self-reliance: growing up in a Georgia shack without plumbing; the stern grandfather who worked him from sunrise to sunset and once told him that "Old Man Can't is dead. I helped bury him."These are stories worth telling. Thomas deserves credit. Not enough people, frankly, give him credit for something else, his intellect. Some liberal critics flirt with racism in the way they describe Thomas as an intellectual lightweight.But the way some white conservatives tell the story of Thomas' rise from poverty also perpetuates racist stereotypes. They imply that Thomas and his hard working, no excuses grandfather are unusual characters in the black community. They depict Thomas as this lonely apostle of self-reliance, as if most black people prefer sitting on the couch drinking Kool-Aid while waiting for the government to send them a check. 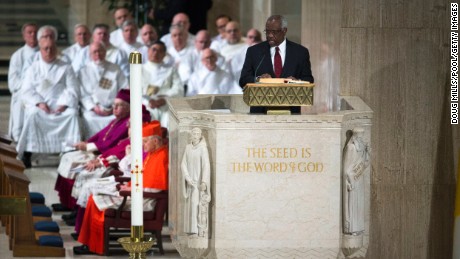 One journalist praised Thomas in 2017 for being the product of a "caring, supervised, value-laden upbringing, compared with a more usual poor, fatherless black childhood" marked by "victimhood."Even Thomas has reinforced this notion of pervasive black dependency. He gave a speech in the 1980s before a group of black conservatives where he said of his sister: "She gets mad when the mailman is late with her welfare check. That`s how dependent she is. What`s worse is that now her kids feel entitled to the check too. They have no motivation for doing better or getting out of that situation.'' Here's some news: Black people have been practicing self-reliance for centuries. We've had to, for survival. We know through bitter experience that white America's investment in racial equality is sporadic. Racial progress has always been followed by a "whitelash."Thomas' stern grandfather is a familiar figure in the black community. Plenty of black people can tell you stories of grandparents, pastors, teachers, and coaches who all preached the same message: Rely on yourself, because you can't rely on white people.It's almost impossible to find a revered black leader who didn't preach some form of this message.Even President Obama, the so-called "radial socialist" who wanted to "redistribute the wealth," sounded many times like Thomas' grandfather. 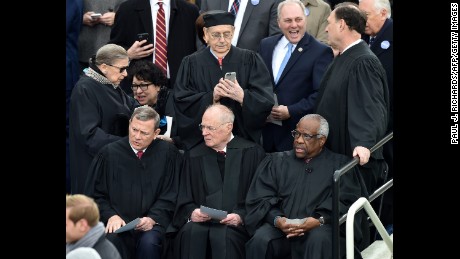 It was Obama who chided black parents for allegedly feeding their children "cold Popeye's" chicken for breakfast and black boys for wearing a "eight-pound chain around your neck." He once told a group of black college students, "Nobody cares how tough your upbringing was. Nobody cares if you suffered some discrimination. And moreover, you have to remember that whatever you've gone through, it pales in comparison to the hardships previous generations endured." Obama lectured black people so much about not using racism as a crutch that some commentators criticized him for it.But you rarely, if ever, hear white conservatives acknowledge this history. They're still stuck on the Ronald Reagan "Welfare Queen" narrative about black dependency.

He cast an 'atrocious' vote against black America

There's something else many white conservatives miss: The contradiction between Thomas' words and actions.Thomas has lectured blacks about not defining themselves as racial victims. He once criticized civil rights leaders who he said, "B*tch, b*tch, b*tch, moan and moan and whine" about the Reagan administration.But when his nomination to the Supreme Court was threatened by Anita Hill's allegations of sexual harassment, he played the race card by saying he was the victim of a "high-tech lynching." 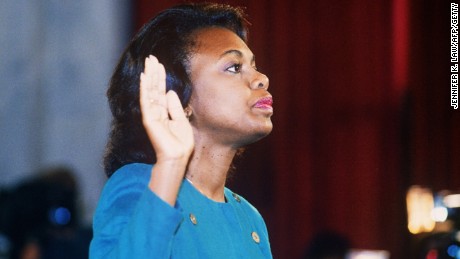 Thomas has lectured blacks about the evils of affirmative action. Yet he made it into Yale Law School because of an affirmative action program. "His entire career is a result of thrusts for diversity that he would deny in others," Lawrence Goldstone, author of "On Account of Race: The Supreme Court, White Supremacy, and the Ravaging of African American Voting Rights," told me."How many highly talented black or Hispanic kids are out there who could really make a difference if only the starting line was staggered to take into account how much baggage they're carrying."Then there was Thomas' public confrontation in 1991 with Anita Hill, the black woman who accused of him of sexual harassment. Many black women, in particular, still believe that he lied when he denied sexually harassing Hill. Thomas vigorously denied that he did anything wrong. "A large portion, if not the majority, of black women over time began to think that Clarence Thomas may have in fact lied and that he almost certainly did," says Ravi Perry, chair of the political science department at Howard University. 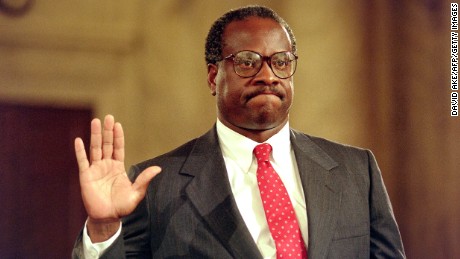 But it's Thomas' voting record that has cemented the cynicism many blacks feel toward him.Critics say he has consistently voted against black people as well as other marginalized groups: women, LGBTQ people, religious minorities and death row inmates.He is the first Supreme Court justice to openly criticize the high court's landmark civil rights ruling, Brown v. Board of Education.And he joined a 2013 high court decision — Shelby County v. Holder — that eviscerated the Voting Rights Act, the crown jewel of the civil rights movement.His vote on Shelby contributed to "the most unjustifiable and hurtful decision imposed on black America in the past half century," Randall Kennedy, an author and professor at Harvard Law School, wrote in a recent article on Thomas."It is atrocious, right alongside such judicial delinquencies as Plessy v. Ferguson, Giles v. Harris, and Korematsu v. United States," Kennedy wrote. "Yet here is Thomas providing a crucial vote to cripple legislation for which the proponents of racial justice marched, bled, and in some instances died.''

He has a bleak vision of integration

You won't hear many white conservatives address these deeper questions that many black people have about Thomas. Why is that?I have a theory. It's part of what I call the Clarence Thomas con — a way to divert people's attention away from the more unpleasant aspects of Thomas' legacy. It's far easier to mislead the public about the true nature of Thomas' isolation in the black community than to defend accusations that his judicial decisions harm black people and other marginalized groups. Or to deny charges that his opposition to affirmative action is "at war with his own biography."Focusing on Thomas' biography also takes away attention from his pessimistic views about integration and some white Americans.One of the reasons why The Rev. Martin Luther King Jr.'s "I Have a Dream" speech still captivates people is because he portrayed a future America where whites and blacks would "be able to sit down at a table of brotherhood." It's a beautiful vision of an integrated America for which countless people literally died. But I wonder if many people understand Thomas' bleak view of racial progress. 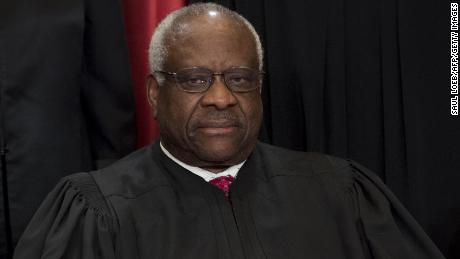 He is a persistent critic of integration. He once said, "The whole push to assimilate simply does not make sense to me." He's also skeptical about white America's ability to see past skin color.He once told a black reporter: "There is nothing you can do to get past black skin. I don't care how educated you are, how good you are at what you do — you'll never have the same contacts or opportunities, you'll never be seen as equal to whites." Thomas believes that "white supremacy is ineradicable in America," says Corey Robin, author of "The Enigma of Clarence Thomas," a new biography that has earned widespread praise. "Thomas does not believe that politics in any sense of that term — electoral politics, social movements, state action and regulation, organizing, even more radical notions of transformative change — can positively affect black people; he thinks politics mostly hurts black people." 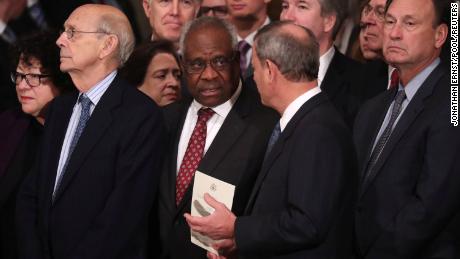 Thomas was even unimpressed when the US elected Obama, the first black president. He said that a black person could only become president if the "elites" and "the media" picked him or her.Thomas' skepticism about integration, though, is not rare in the black community. It's not uncommon to hear black people say in private that integration hurt them in some ways because their children were put into schools with white teachers who didn't believe in them, and their institutions were weakened. Thomas alluded to this belief while talking about one of his heroes, Malcolm X, in a 1987 interview. "I don't see how the civil-rights people today can claim Malcolm X as one of their own. Where does he say black people should go begging the Labor Department for jobs? He was hell on integrationists. Where does he say you should sacrifice your institutions to be next to white people?

He forgets his history

Here is where Thomas loses many black people.He laments what black people lost due to integration. He praises black individuals like his grandfather who were able to build their own busineRead More – Source

Houston police officer shot and killed in line of duty

Juice Wrld: US rapper dies aged 21 ‘after seizure at airport’

Pensacola attack: US to review screening of foreign military