If you want to create a classic French Christmas feast this year, these are the 12 dishes you'll need to include, writes French food blogger Florence Richomme.

The culinary highlight of a French Christmas is not for most families on Christmas Day, but late on Christmas Eve, and traditionally begins once people return from midnight mass.

The feast is called "Le Reveillon", meaning "awakening" or "wake up", because it normally goes on until the early hours of the morning.

To do things properly really means eating festive dishes made with ingredients you wouldn't use the rest of the year, says Richomme of the My Parisian Kitchen blog.

Here are 12 Christmas dishes Richomme says must be included on the menu of a classic French Christmas:

Foie gras, which is often homemade, is the one dish that immediately comes to mind and really represents Christmas in France. Foie gras is eaten on different kinds of bread toasts, brioche bread or gingerbread and sometimes with fig spread or onion confit.

Even French kids love to eat smoked salmon, especially on blinis or thin white sandwich bread slices. An essential for Christmas that is now eaten all year-round and used as an ingredient for many fancy recipes.

The French love scallops as they are very delicate and luxurious. The done thing is to present them in their shells or briefly fry them and dress with a sauce.

One of the favourite ways of preparing them is with an orange cream sauce and braised endives with honey, and scallop tartar is also becoming more and more popular.

Served on a large platter on a bed of ice, oysters come with a lemon wedge or a mignonette sauce made with red wine vinegar, chopped shallots and black pepper.

Capon or turkey with chestnut stuffing

This is the most popular and classic Christmas dish. The capon or turkey is braised in the oven with a generous chestnut stuffing. Classic sides include chestnuts, green beans wrapped with bacon and truffle mashed potatoes.

Rarely eaten during the rest of the year unless there's a hunter in the family, wild game often makes it onto the Christmas menu in France.

Common choices are venison, wild boar or pheasant marinated in red wine or served with a sauce (wine or cranberries for example).

As Christmas is a Christian feast which considers eating fish as a sign of abstaining, the French like to have fish but fancy species like monkfish, turbot, sole, bass prepared in a sophisticated manner. For example, monkfish blanquette with morels.

A huge cheese platter with many different varieties is an absolute must-have. It should be neatly arranged and served with different kinds of breads. Some cheeses also have festive versions like truffle camembert which is to die for!

Bûche de Noël is definitely the one and only Christmas dessert. Traditionally shaped to represent the real wood log placed in the fireplace on Christmas Eve, the log is often made of garnished swiss roll topped with buttercream or ganache and decorated with tiny figurines.

Ice cream logs are becoming more and more popular among dessert addicts and chocolate or chestnut are no longer the only beloved flavors.

It’s common to have lychee, clementine, passion fruit, mango at the end of the meal, and so refreshing after a rich meal! And by extension dried fruits such as dates (sometimes stuffed with almond paste) and candied fruits are also popular.

It’s difficult to choose a favourite from all the tiny bite size Christmas cookies like Bredele from Alsace in eastern France, chocolate and dried fruits, as well as candied oranges. But as Christmas is synonymous with chocolate, the ultimate treats are chocolate truffles made of black chocolate ganache and coated with cacao. Who could resist them?

This is not a dish but is actually something you definitely have to serve for a classic French Christmas Eve dinner. You may want to pour in crème de cassis (blackcurrant liquor) to make a kir royal. But if champagne is good, there’s no need!

Florence Richomme is a Frenchwoman living in Paris who blogs about cooking at My Parisian Kitchen. Follow her on Facebook here for regular updates. 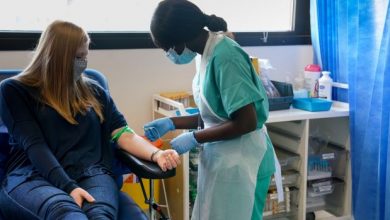 France to overhaul the baccalaureate in tricky school reform

How to say ‘OUCH’ in French (and ten other sounds)