wp booster error:
The path /home/monacoweekly/public_html/wp-content/themes/Newsmag/single_template_5.php of the single_template_5 template not found. Did you disable a tagDiv plugin? Armenian FM on border clashes with Azerbaijan: ‘War would be a catastrophe for the region’ - Monaco Weekly 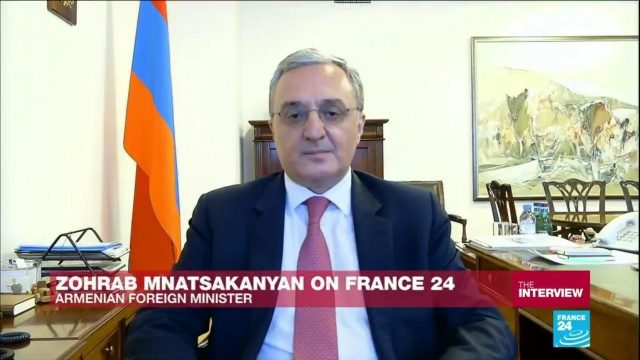 In an interview with FRANCE 24, Armenia's Foreign Minister Zohrab Mnatsakanyan reacted to the recent flare-up in violence between Armenia and Azerbaijan. At least 16 people have been killed on the border in the worst violence in the area since 2016. Mnatsakanyan said Yerevan was committed to enforcing a ceasefire and monitoring mechanism to avoid further clashes and insisted that war was not a solution.

Armenia's foreign minister accused Azerbaijan of provoking the latest flare-up with his country, but said that the attempt to destabilise Yerevan had failed due to its "decisive" military response.

Mnatsakanyan noted that the fighting had receded for the past few days thanks to the mediation of Russia, France and the US. He said Armenia was committed to enforcing a ceasefire and monitoring mechanism to avoid further clashes and vowed that that war was not a solution. He called the threat by Azerbaijan to strike Armenia's sole nuclear plant a dangerous "threat to the broader region".